AI joins the hard hats on the construction site

AI joins the hard hats on the construction site 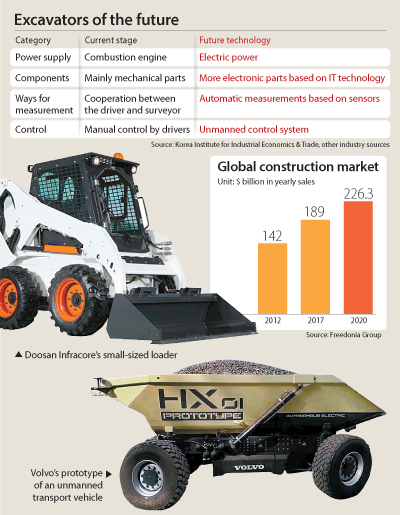 A small vehicle crawls its way into a worn-out water pipe, looking for a leak. Its laser system detects objects blocking its way, and using four precision cameras, it spots the problem and sends a live video back to its human operator.

The unusual vehicle is a water pipe rehabilitation robot developed in 2014 by PoteNit, a local start-up that specializes in AI robots and sensors. With the information gathered from its sensors, this robot can create a map of its immediate area, find a suitable route in it and then follow that path, all thanks to an algorithm designed by PoteNit. The start-up is receiving orders from major companies in fields ranging from construction to agriculture and manufacturing.

Doosan Infracore, which has worked with PoteNit since 2015, said the company has “the most advanced technology for autonomous driving in the country.” It announced Thursday that it acquired shares in the company in order to develop products together for the fourth industrial revolution.

The growth of unmanned vehicles has finally reached the construction industry. Manufacturers of construction machinery like excavators, bulldozers and forklift trucks are developing their own automation technologies or investing in start-ups with promising technology.

Doosan Infracore isn’t alone. Its competitors Volvo Construction Equipment and Hyundai Construction Equipment are also working on their own autonomous construction equipment. Volvo, for instance, unveiled a construction site back in 2016 where a dump truck, wheel loader and transport vehicle, all unmanned, excavated ingredients for cement from a quarry. The communication between the machines was based on Internet of Things technology. The wheel loader picked up the materials, and the dump truck precisely received them and transferred them to their destination.

During the first half of this year, Hyundai Construction Equipment also plans to start mass-producing excavators equipped with a machine guidance system that automatically measures the geographical features of the construction site.

There are two motivations behind the race for unmanned construction equipment - enhancing productivity by running construction work around the clock and reducing injuries and deaths among workers.

Excavating, for example, first requires a driver to use an excavator to dig in the ground. Then a surveyor comes in to measure the size and gradient of the land that was just dug out. If the dig didn’t meet the requirements of the blueprint, the excavator has to dig again to make sure it matches the plan. This kind of work takes a long time and often produces accidents, where the excavator and surveyors collide, causing injuries. This is why manufacturers are looking for ways to measure the ground with a sensor attached to the excavator’s bucket instead of a human surveyor.

“[Young] people are generally unwilling to work on construction sites, so the labor force that controls the machines is getting older and older,” said a source at Doosan Infracore. “Unmanned excavators will reduce the number of repeated tasks, so we think it will be able to increase work efficiency by 20 to 50 percent.”

Experts in artificial intelligence technology point out that slowing the adoption of cutting-edge technology out of concerns for job loss will hinder local construction companies’ competitiveness and eventually lead to fewer jobs in the long run.

“The best option is to leave dangerous work to machines and re-educate the current workforce to find other jobs,” said Cho Sung-bae, a professor of computer science at Yonsei University.