‘Burning’ to compete for top prize at Cannes

‘Burning’ to compete for top prize at Cannes 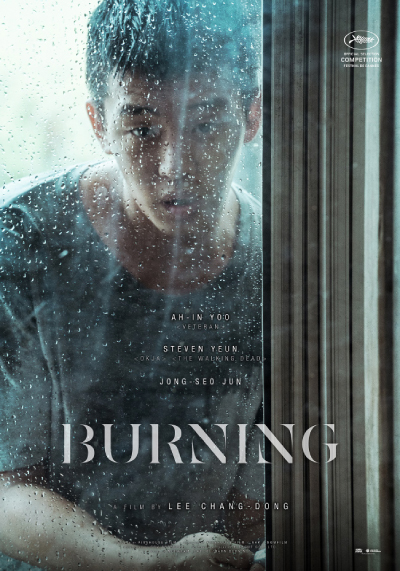 Auteur Lee Chang-dong’s latest mystery flick “Burning” will compete for the top Palme d’Or prize at next month’s Cannes Film Festival, which kicks off on May 8 and runs through May 19.

The lineup of the 71st Cannes Film Festival was revealed in Paris on Thursday morning, local time. Cannes introduced the 18 movies in competition this year, which includes director Spike Lee’s “BlacKkKlansman,” David Robert Mitchell’s “Under the Silver Lake” and Alice Rohrwacher’s “Lazzaro Felice.” Rohrwacher is one of the three female filmmakers to compete at Cannes, along with Nadine Labaki and Eva Husson.

“Burning” is the only Korean film to vie for the top prize at the upcoming Cannes. Starring Yoo Ah-in, Steven Yeun and a rookie actor Jeon Jong-seo, the film follows a mysterious incident that happens to two young men and a woman in their 20s. It is an adaptation of the short story “Barn Burning” by Japanese author Haruki Murakami.

“Burning” is the first movie by Lee in eight years. It will mark the director’s third entry into Cannes’ competition section, after “Secret Sunshine” (2007) and “Poetry” (2010). Jeon Do-yeon clinched the best actress award for her role in “Secret Sunshine” while “Poetry” was awarded the Best Screenplay.

Another Korean director who will be heading to this year’s Cannes is Yoon Jong-bin, whose feature “Gongjak” will be screened under Midnight Screenings section. Translated as “The Spy Gone North,” the movie, starring Hwang Jung-min and Lee Sung-min, is about a South Korean secret agent who discovers a clandestine deal among North Korea’s high-level officials.

Meanwhile, this is the third consecutive year that a Korean director’s movie has been selected to compete in the prestigious film festival, following Park Chan-wook’s “The Handmaiden” (2016) and Bong Joon-ho’s “Okja” (2017).