A lifelong commitment to education

A lifelong commitment to education 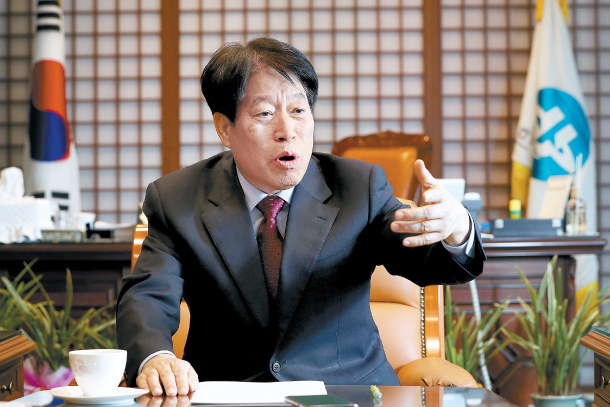 Ryu Su-noh, president of Korea National Open University, discusses his plans for the school at his office in central Seoul on April 4. [JANG JIN-YOUNG]

Ryu Su-noh, president of Korea National Open University (KNOU), credits the school’s distance learning program for getting him where he is today.

The son of a farmer, Ryu is the first graduate of KNOU to lead the university. He was appointed to the position in February after 80,000 alumni signed a petition to make him head of the school. It was a long time coming. Ryu had been under consideration for three years.

“If it wasn’t for KNOU,” Ryu said, “I might not have been able to make it here today.”

Founded in 1972 as an affiliate of Seoul National University, KNOU is the first institute of higher education offering distance learning and lifelong education in Korea. Initially a two-year junior college program, the school became an independent institution in 1982 and adopted a four-year bachelor’s program in 1991.

In 1999, Ryu became the first alumnus of the school to teach there as a professor.

Ryu shared his experience of attending the university and working for the school in an interview with the JoongAng Ilbo in his new office in central Seoul on April 4.

Q. Why did you decide to attend KNOU?

Then I dreamed of going to college, and that’s how I enrolled at KNOU under the department of agriculture and life science. Afterward, I passed the level-seven exam and was placed in the North Gyeongsang Provincial Government. I tried to take care of work and my studies side by side, and that’s when the concept of lifelong education became valuable to me. KNOU was really designed for people like me.

What was your experience like as the first alumnus to become a professor at the school?

After getting my college diploma, I wanted to continue with my studies. I decided to get my master’s and doctoral degrees in agronomics at Chungnam National University [in Daejeon].

At the Rural Development Administration, I focused my research on developing rice varieties. Because the government was offering more study abroad programs, I had a chance to carry out research at Nagoya University in Japan and Rutgers University in the United States.

In 1999, I heard that they were picking a professor at KNOU, so I applied for the position. Of the 15 applicants, 10 of them were graduates of Seoul National University [one of the country’s most prestigious schools], but eventually, they selected me.

It seems like your life has been filled with challenges. How has that influenced you?

Through my personal experiences, I started believing that there was still hope and a future in this society. I began to believe that a chance is always granted for people who try. Upon becoming a professor, I taught and researched even more passionately. I was able to receive more than 10 billion won ($9.4 million) in research grants from the government. I was even able to acquire three international patents.

It seems like the value of a bachelor’s degree is declining. Do you also believe it is?

Initially, many economically-disadvantaged people attended our school. Even now, our tuition is fairly cheap at 300,000 won per semester. But our school has made its place as an institute of lifelong education. Students in their 40s and 30s make up most of the school. We have students ranging from 14 to 90 years old.

There are even five professors at our school who are enrolled as students at the school, too. One professor of digital media attends classes in the department of agriculture and life sciences, while another professor of agriculture takes English language and literature classes at the university.

We have a four-year college with 23 different departments, but our Prime College [for lifelong learning] also has 10 departments. Students can attend classes to get a certificate in a short period of time or specialize in a field of study.

What are your future plans as the school’s president?

I’m examining ways in which people can see our educational quality and attend the school. Even after reunification [of the two Koreas], our school can become a valuable place for North Koreans to attend at a low cost. If we want to give hope to all citizens, we have to focus on lifelong education.