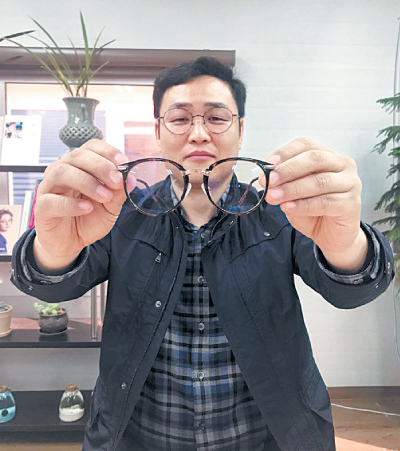 After the Korean women’s curling team shot to fame by breezing through to the finals of the PyeongChang Winter Olympics in Gangwon, it wasn’t just the players that were suddenly in the limelight. Skip Kim Eun-jung’s distinctive glasses are now nearly as famous as the silver-medal team.

Jang Yong-chan, the 51-year-old creator of the iconic glasses and chief executive of Fantom Optical, is now busy making plans to share his newfound profit.

Kim’s wire-framed glasses mesmerized viewers when cameras zoomed in on her no-nonsense stare, deep in concentration during the curling matches at the Olympics.

The glasses, buoyed by the team’s sudden fame, grew so popular so quickly that orders increased over 30 percent in March compared to the previous year. Jang’s 17 employees churn out the eyewear at a small factory in Daegu’s Buk District. The shop, established in August 2001, only measures 260 square meters (2,800 square feet).

Foreign media outlets did not miss the skip’s distinctive look. “Kim dons large, wire-framed glasses when she takes the ice, in the mirror image of Clark Kent returning to Earth,” reported USA Today. “Kim Eun-jung, who wears eyeglasses that have become the most iconic fashion accessory at the Games,” The New York Times raved.

But Jang has no intention of being the sole beneficiary of his good fortune. “As long as I’m working, I’ll donate 1 percent of the profit from selling the iconic glasses toward children of low-income families. Though 1 percent may not seem like a lot, I believe it can help a lot of people,” he told the JoongAng Ilbo.

The famous glasses are the 2010 “plume” model, though now, they are more commonly referred to as the “Yeong-mi model” by customers. Kim Yeong-mi is the team’s lead whose name Kim Eun-jung frequently shouted during matches.

Fantom currently stocks the plume model at over 1,300 eyewear stores in Korea. It has also exported them to Canada, China, Germany and Japan. Each pair costs around 70,000 won ($65), which means the 1 percent donation will not be a small sum.

Jang isn’t stopping there. He is also providing free sunglasses to low-income senior citizens recovering from cataract surgery, a procedure that leaves the eyes more vulnerable to UV light.

Jang has also pledged to provide an unlimited supply of glasses and sunglasses to all members of Korea’s national curling teams, including the wheelchair athletes.

As a former officer in the Special Forces, Jang says he is happy to give back to the country. “The government organized the PyeongChang Winter Olympics, and Eun-jung is part of the national curling team,” he said. “It was Korea that made the plume glasses popular, and I credit my happiness to the country. I want to share my gains with those less fortunate.”