Moon continues to back Kim

Moon continues to back Kim 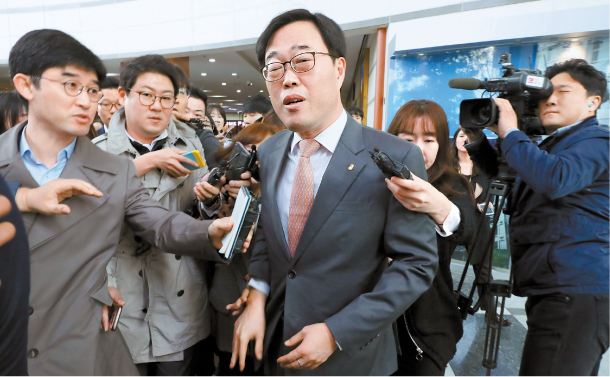 Reporters rain questions on Kim Ki-sik, center, the recently appointed governor of the Financial Supervisory Service, as he walks out of a meeting with CEOs of asset management banks in the Korea Financial Investment Association in Yeouido, western Seoul, on Friday. [KIM KYUNG-BIN]

President Moon Jae-in on Friday said he will dismiss Kim Ki-sik, the new head of the Financial Supervisory Service (FSS), if any of Kim’s controversial actions as a lawmaker were found to have violated laws, rejecting mounting political pressure to fire him.

“If any one of Kim’s actions when he was a lawmaker is found to have been in violation of laws in objective judgement, I will have him dismissed,” said Moon in a statement released by the Blue House.

Moon also said that, even if Kim did not technically break the law, he would fire him if his behavior on the overseas trips failed to meet the ethical standards of fellow lawmakers at the time.

The new FSS chief has become a headache for the ruling Democratic Party (DP) and the presidential office due to the controversy generated over three overseas trips he took that were paid for by financial institutions he was supposed to oversee as a lawmaker. He has also been accused of burning through political donations in the last five months of his parliamentary term.

While Moon made it clear he will not fire Kim merely over allegations, he acknowledged Kim’s past actions fell short of standards for high-level officials.

“Aside from whether it was legal or not for a lawmaker to go on a foreign trip paid for by an institution he or she oversees, I humbly accept public criticism that such an activity fell short of people’s standards,” he said.

Moon’s stance on Friday followed the presidential office’s decision a day before to have the National Election Commission (NEC) determine whether Kim violated laws as a lawmaker.

The Blue House said it will decide what to do with Kim once it reviews the NEC’s ruling in the case.

To compare Kim’s case to other lawmakers, the Blue House also looked into cases of overseas trips taken by lawmakers across party lines in which travel expenses were paid for by institutions they were supposed to oversee.

It said it randomly selected 16 institutions, without naming them, and discovered a total of 167 such overseas trips. Of the 167, 65 trips were for lawmakers of the ruling DP while 94 were for lawmakers of the major opposition Liberty Korea Party (LKP). That puts the LKP in a bind considering it slammed Kim and defined his overseas trips as a form of bribery and abuse of power.

The finding served as a basis for Moon’s decision not to fire Kim, leading him to believe his behavior as a lawmaker was customary at the time.

“If Kim’s behavior was lawmakers’ customary behavior [back then],” Moon said, “it is hard for me to accept the opposition’s criticisms and demands for his dismissal.”

Moon admitted that it would have been easier for him to choose someone from the bureaucracy as FSS chief to pass the scrutiny of the opposition parties.

But to bring reforms to areas in need of a fundamental shakeup, a bold appointment was necessary, he said, a reference to Kim, who is nicknamed “chaebol sniper” for his advocacy of reining in conglomerates.

“But I am also afraid of the opposition and the resistance such a bold appointment will incur,” he said. “It’s something I always grapple with.”

It remains to be seen how Moon’s statement and the Blue House’s bringing in of the NEC will affect public opinion.

In an opinion poll conducted on Wednesday of 400 adults nationwide, 50.5 percent of respondents said Kim should be dismissed while 33.4 percent said he should hold onto his job. 16.1 percent said they didn’t have an opinion.

The poll was conducted by the pollster Realmeter with a margin of error of plus or minus 4.4 percentage points.

A criminal investigation of the allegations against Kim has begun and prosecutors Friday morning raided the offices of financial institutions to obtain evidence.