Shim Suk-hee qualified for the Korean national short-track team for the seventh consecutive season after winning three of the four races at the Mokdong Ice Rink in western Seoul on Sunday. 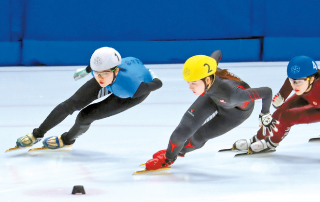 Shim Suk-hee, left, takes the outside during the 1,000-meter race at the first national team trial at Mokdong Ice Rink in Seoul on Thursday. [YONHAP]

Based on the overall points standing from the two trial races, the top seven male and female skaters qualify for the national team alongside the top finisher from the International Skating Union (ISU) World Short Track Speed Skating Championship last month, who automatically qualifies for the national team for the 2018-19 season.

Though the national team roster allows for up to eight female and male skaters, only six compete at ISU World Cup events. The sixth and seventh finishers at the national team trial are added as alternates in case of injuries.

Though Shim, who was captain of the women’s short-track team at the PyeongChang Olympics, struggled to medal in individual races at PyeongChang, she led the women’s team to win the relay race. At the season-ending ISU World Championship, she finished runner-up in the overall point classification, behind Choi Min-jeong.

As Choi, two-time Olympic gold medalist at PyeongChang, didn’t compete at the national team trial since she won the ISU World Short Track Speed Skating Championship last month, Shim cruised through the national team trial, winning seven out of eight races from the two trials - hardly a surprise considering she is ranked in the top five in the world in two of the three individual distances.

Having won all four races in the first trial, Shim headed to the second race with 50 points. Prior to Sunday’s race, Shim got off to a great start on Saturday, clocking 44.455 seconds in the 500 meters to win the race. Shim continued to dominate with another victory in the 1,500-meter race to get to the top of the points standing at 68 points.

After winning the first two races, Shim had guaranteed her spot regardless of the result in the 1,000 meters and SuperFinal race on Sunday.

No Doh-hee came in second overall, earning her spot alongside Shim and Choi in the individual races. Only the top two finishers from the national team trial and the pre-qualified skater get to compete in individual events.

As a short track powerhouse, the Korean national short track team trial races are often said to be even tougher than international events. Three of the skaters - Kim A-lang, Lee Yu-bin and Kim Do-kyoum - that competed at the PyeongChang Olympics missed their spot on the national team for the 2018-19 season.

Lee and Kim Do-kyoum failed to finish within the top seven while Kim A-lang didn’t compete in the second trial race at all due to an injury after falling in the 1,500-meter race during the first trial.

In the men’s races, Lim Hyo-jun, gold medalist in the 1,5000-meter race at PyeongChang, won the national team trial. Despite getting disqualified in the 1,500-meter race on Saturday, Lim won the 500 meters to move up to first in the overall point standing.

Lim, who also won the first national team trial last week, continued his stride with another gold in 1,000 meters and finishing third in the 3,000-meter SuperFinal on Sunday.

Hwang Dae-heon didn’t have to race in the national team trial as he was the best finisher among the Korean skaters at the ISU world championship, finishing third overall.