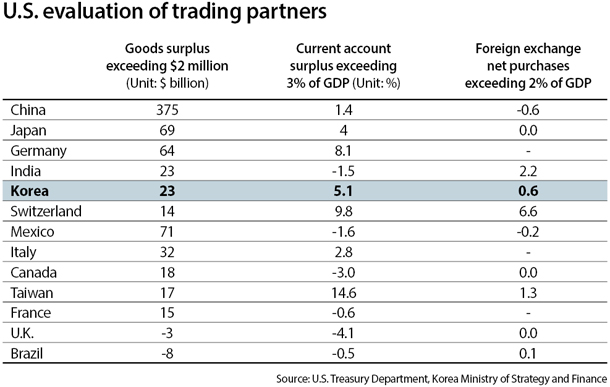 Korea has avoided being labeled as a currency manipulator but remains on a monitoring list for the fifth consecutive time.

At the same time, pressure from the Donald Trump administration to increase transparency on Korean financial authorities’ intervention in the current market continues to build.

According to a U.S. Treasury Department report released Friday, Korea remains on a monitoring list of six countries - Korea, China, Japan, Germany, Switzerland and India - that the U.S. government suspects of being possible currency manipulators or close to being currency manipulators. Five of the countries were also featured on the same list in October last year. India is a new addition.

According to the U.S. government, Korea meets two out of three conditions to be classified as a currency manipulator.

The three conditions are: having a trade surplus with the United States exceeding $20 billion; a current account surplus exceeding 3 percent of the country’s GDP; and consistent intervention by the government of shoring up foreign currency worth a minimum 2 percent of the GDP for a year or longer.

Korea’s trade surplus with the U.S. exceeds $23 billion and its current account surplus is equivalent to 5.1 percent of the nation’s GDP, both measures that would qualify it as a currency manipulator. Korea is saved by its foreign currency net purchasing, at 0.6 percent, which falls well below the 2 percent threshold set by the U.S. government.

Countries that are labeled as currency manipulators face various restrictions from the U.S. government on trade.

“The won appreciated by 13 percent against the dollar in 2017,” the U.S. Treasury Department noted in its report released last week. “[However,] there was a notable and concerning pick-up in intervention in November 2017 and January 2018 that appears to have been for the purposing of slowing won appreciation against the dollar, although these purchases were partially reversed through foreign exchange sales in February.”

The U.S. government estimated that between November 2017 and January 2018 the Korean authorities net purchased $10 billion.

“It is important that the Korean authorities act to strengthen domestic demand and avoid reverting to excessive reliance on external demand for growth,” the reported noted. “[The U.S.] Treasury will continue to monitor closely Korea’s currency practices and urges the authorities to report its exchange rate intervention in a transparent and timely manner.”

The U.S. Treasury demand that Korean authorities “report its exchange rate intervention” was not mentioned in the October 2017 report.

Recently the Korean government has been under pressure from the Trump administration to report its market intervention, including in a report from the U.S. Trade Representative late last month that mentioned that the U.S. Treasury Department and the Korean Finance Ministry are finalizing provisions prohibiting competitive devaluation and exchange rate manipulation.

This issue caused controversy as it was thought to be a sideline bargain connected to the FTA renegotiation. The Korean government refuted that there were any connections to the renegotiated bilateral trade agreement.

The Korean government has seemingly stepped back from intervening in the foreign currency market recently, presumably in the hope of avoiding being labeled as a currency manipulator. As a result the won appreciated to the 1,050 won range, which could hurt Korea’s exports. The won recently recovered to the 1,060 won level.