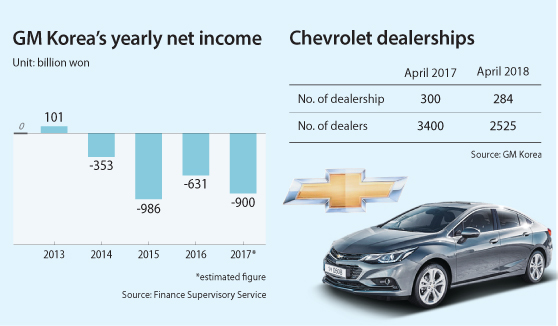 The automaker sold only 6,272 cars last month, a drop of 57.6 percent from last year, according to the latest figures released Friday. It was the first time GM Korea ranked in the very bottom among the country’s five domestic automakers since the company was founded in 2002.

“For the past two weeks, there hasn’t been a single inquiry about purchasing a car,” said Kang Kyung-suk, general manager of a Chevrolet dealership in Seoul. “Salespeople don’t receive base pay like other regular workers. If we don’t sell cars, we don’t get money.”

In the past year, the number of Chevrolet dealerships in Korea has fallen from 300 to 280. The sales staff has shrunk by more than 800 people.

“Even if GM Korea gets back on track, it is going to cost a lot of money to restore the staff and closed dealerships,” said Kim Hwan-young, head of GM Korea’s dealers’ union. “It is crucial to resolve the issue in a short period of time or else the entire infrastructure of car dealers will break down.”

Suppliers have been hit hard by General Motors’ recent decision to shut down its factory in Gunsan, North Jeolla, and rumors of the automaker’s pullout from Korea. GM Korea has about 300 contractors, and nearly 30 percent of them rely completely on the automaker for business. According to one industry report, there are about 100,000 people working at these companies. Including subcontractors, the number jumps to 300,000.

“Workers at GM Korea receive retirement packages when they are laid off or voluntarily quit the company,” said Moon Seung, head of an emergency committee representing suppliers. “Workers at auto parts makers don’t have that kind of protective device. Most parts suppliers share a long history with GM Korea from when it was Daewoo Motors. It is a really painful period for us. If GM Korea goes bankrupt, it will be a totally different story from when Daewoo Motors went bankrupt.”

Seoul Precision was recognized by General Motors as a supplier of the year for its high-quality product and good after-sales service. It has supplied engine parts for GM Korea for the past 18 years.

“With the sharp drop in GM Korea’s sales, we have been piling up a surplus of products at our factory,” she said. “The manufacturing industry is already in a very difficult situation with increased labor costs. There needs to be some differentiated support for GM Korea suppliers or else we will all go down the drain at once.”

According to the Korea Auto Industries Cooperative Association, exports of auto parts from Korea to General Motors’ headquarters amounted to $2.5 billion in 2014.

“If General Motors is to pull out its assembly line from Korea, $2.5 billion worth of exports to General Motors will also get pulled,” said Ko Moon-soo, an executive director of the association.