[ANALYSIS] Inside the battle for GM Korea’s survival

[ANALYSIS] Inside the battle for GM Korea’s survival

The hardships facing GM Korea show no signs of abating as the two-month-long battle between the company’s stakeholders continues with the automaker now on the verge of filing for bankruptcy.

The tug-of-war began when GM shut down the company’s Gunsan, North Jeolla, plant as part of Chairman Mary Barra’s massive effort to downsize the company’s global units that are not making enough money.

GM International head Barry Engle made six visits to Korea this year. Seven negotiation sessions were held between the GM Korea management and the labor union. More than a dozen meetings were held with people in political and financial circles to resolve the issue.

The outcome so far: nothing.

After failing to come to an agreement at the company and its union’s eighth negotiation on Thursday, GM President Dan Ammann hinted that GM Korea will file for bankruptcy if no tangible agreement comes out within a week, according to Reuters on Friday.

The president reiterated that the April 20 deadline for the company and its labor union to come to an agreement will not be postponed. Tension between GM Korea management and the union has only intensified.

GM laid out the possible solutions to turn around its cash-strapped Korean affiliate when Engle met with government authorities in February after announcing the Gunsan plant’s shutdown.

It suggested a debt-to-equity swap of GM Korea’s 2.9 trillion won ($2.7 billion) borrowed from its U.S. headquarters, which will play a critical role in relieving the company’s liquidity problem.

To sustain the Korean operation, GM headquarters promised to allocate two competitive models to its Bupyeong District, Incheon, and Changwon, South Gyeongsang, plants. Industry sources suspect the vehicles will be one CUV model and one small SUV model. 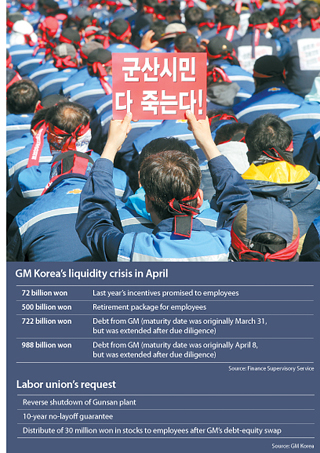 About 200,000 units of the new models will be produced per year, creating a total production count of 500,000 cars a year for GM Korea.

GM also suggested a new injection of 3.2 trillion won over the next 10 years for the Korean affiliate’s facilities investment, among other projects. It also asked the Korean government to designate Bupyeong District and Changwon, where their assembly lines are located, as foreign investment zones, which would give the business huge tax breaks.

What seems like a plausible scenario to save the beleaguered automaker comes with strings attached.

GM asked the state-run Korea Development Bank to participate in a debt-to-equity swap, investing 500 billion won to maintain its position as the second largest shareholder in the company. The KDB currently holds a 17 percent stake in GM Korea. The American automaker requested that the Korean government help it put together the 3.2 trillion won it says GM Korea needs.

If the KDB doesn’t buy the new stocks, it will lose its veto right, which requires at least a 15 percent stake in the company. The Korean government, however, is not willing to entertain GM’s notions.

“The [KDB] cannot spend even 1 won on salvaging the old money which is the result of GM’s business decisions in the past,” Lee Dong-gull, the head of the KDB, told reporters on Friday.

“[Contributing to the new injection] is also under the conditions of using new capital to relieve job losses and the company,” he added.

The KDB is planning to request that General Motors reduce the value of the headquarters’ share in its Korean affiliate.

“The share value reduction is likely to have the ratio of 20:1 to maintain the share the KDB has in GM Korea,” said an official from the KDB.

According to Lee, GM has so far not been receptive to the idea of reducing the value of the headquarters’ share in the Korean affiliate.

Who should take more responsibility for GM Korea’s 3 trillion won in debt will become clearer when an accounting firm finishes its due diligence on the troubled carmaker.

Samil PwC, which is in charge of the due diligence process, will look into the legitimacy of GM Korea’s high rate of cost to sales price, which is set at around 90 percent. According to industry data, the rate of costs to sales price at Hyundai Motor and Kia Motors is around 80 percent, meaning GM Korea can’t take that much of a profit.

The accounting firm is also expected to look into the high interest rate that General Motors imposed on GM Korea. The rate was set around at 5 percent while an average interest rate for an automaker’s loan is set at less than 3 percent in Korea.

The government also rejected GM’s request to designate Bupyeong and Changwon as foreign investment zones, and asked it to submit a more detailed proposal.

Baik Woon-kyu, the minister of industry, said Thursday that the ministry wanted more detailed plans for employment issues and new technology investment. Baik said he is trying to get a “long-term commitment” from GM by securing plans for cars with future-oriented technologies.

The union fights on

Coming to an agreement with GM Korea’s labor union over base pay, incentives and welfare benefits is critical in securing capital from the U.S. headquarters, as it has long raised questions about the high labor costs in Korea.

Over the past seven negotiations, the labor union has agreed to freeze its base pay and cut down on incentives.

The company is asking for an additional cut to welfare benefits such as education fee assistance for employee’s children, which the union is bitterly opposed to.

“We have already yielded on our salary and we cannot hold back any longer,” the union said. “We are going to fight until the end.”

Since last week, about 100 labor union members have staged an overnight sit-in protest in front of the Blue House. The protest will continue until this Thursday, with union members taking turns to come to Seoul from Bupyeong. Three workers from GM Korea’s factory who agreed to the company’s voluntary retirement package committed suicide recently.

A dozen members of the union trashed the office of GM Korea CEO Kaher Kazem in Bupyeong on April 5. When the company asked to install CCTVs at the negotiation table, the union refused.

“The CEO is a human asset of the company and we cannot just sit by and watch a situation where the asset has the possibility to be harmed,” a GM Korea spokesman said.

The union is also asking GM to reconsider shutting down the Gunsan plant, which was marked down by GM for its low operation rate, which barely hovered over 20 percent.

“The low operation rate is because of the strategic miss from the headquarters,” said Park from the union. “Why do we have to share the pain when we’ve done nothing wrong?”

With the conflict between the company and the union showing no signs of settling down, industry insiders speculate that the auto company is likely heading for court receivership.

“With the General Motors president announcing that it will stick to the April 20 deadline while the tension with the union is intensifying, it seems plausible that GM headquarters will file GM Korea for bankruptcy,” said Kim Yong-jin, head of the Korean Academy of Motor Industry.

“It will result in massive layoffs as the court will carry out restructuring first. Whether GM Korea can be salvaged or liquidated remains to be seen.”