Honoring the sweet sounds of hangul

Honoring the sweet sounds of hangul 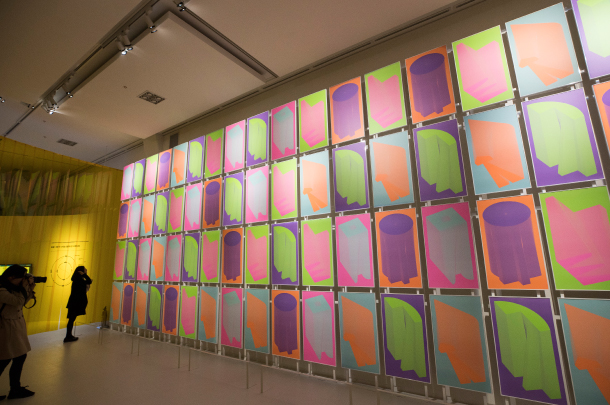 “Hangeul Portamento” by Seok Jae-won is a collage work delineating the shift in amplitude between consonants with different stresses in hangul, or the Korean writing system. [YONHAP]

Koreans are very proud of hangul, the country’s writing system. They boast about how King Sejong invented the system from scratch, without imitating other writing systems or evolving it from pictographs. First introduced in the mid-15th century, hangul is the youngest writing system in the world. Despite its youth, linguists across the globe praise its brilliance as well as King Sejong’s intentions behind it, which was to allow everyone the ability to communicate and express their thoughts. 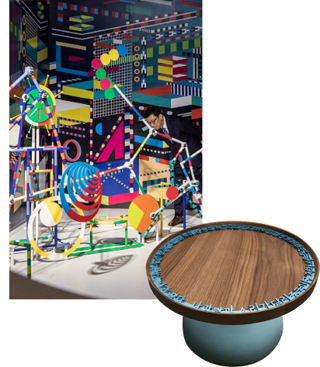 This year marks the 600th anniversary of King Sejong’s ascendency to the throne, and an exhibition recently kicked off at the National Hangeul Museum in Yongsan District, central Seoul, inviting visitors to learn more about hangul and why it is regarded as an efficient means of communication, as well as the artistic value behind it.

“Sound X Hangeul: Variation of the Korean Alphabet,” according to the museum, attempts to “examine the phonetic characters of hangul from a design perspective by highlighting the symbiotic relationship between sounds and letters.”

Before King Sejong invented hangul, Koreans used Chinese characters to record language, but could not express in writing the sounds of Korean speech. Therefore hangul, like the Latin alphabet, is a phonetic script, meaning that the characters are visual representations of sounds. However, the elements are grouped into characters to represent a whole syllable, making it different from an alphabet. In that sense, hangul and sound, says the museum, are closely related, and this exhibition “examines the aesthetics and adaptability of hangul from a design perspective, ultimately highlighting hangul’s exceptional capacity for capturing the dynamic features of sound.” 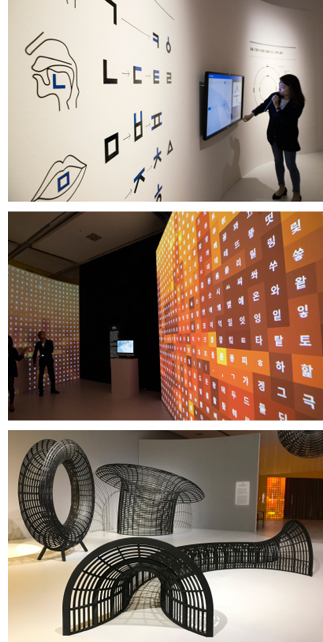 From top: Curator Kim Eun-jae of the museum demonstrates how to operate a hangul kiosk; “Urban Noise: L.A.” by Jung Jin-yeoul; and “Wave Series” by Wang Hyun-min. [YONHAP, YIM SEUNG-HYE]

The exhibition is divided in two parts. The first section is titled “Hangeul Characters: Vessels of Sound” and introduces the principles of how hangul’s 19 consonants and 21 vowels meet to form a total of 11,172 combinations. In the second section, nine artists each present their works that creatively express the principles of hangul as vessels for sound.

Visual artist Vakki, for example, is presenting “Movements to Create Letters.” Her creation, which is a kinetic sculpture of colorful bars powered by electricity, indeed looks like mysterious universe. The modules continuously move to form the shapes of hangul’s consonants and vowels.

“Hangeul Portamento” by Seok Jae-won is a grand collage work that delineates the shift in amplitude between consonants with different stresses in hangul, using the musical term “portamento,” which refers to sliding from one note to another, as his main concept.

Artist Ha Jee-hoon is showcasing his tableware, in which the tabletop is surrounded by a rim with four wooden channels where consonants and vowels can be shifted and aligned to form syllabic blocks, boasting enhanced beauty as well as craftsmanship.

“I hope people realize that hangul can be expressed in a variety of ways while embodying aesthetic beauty,” said Ha.

“King Sejong invented hangul to cater to ordinary citizens,” said Park Young-goog, director of the museum. “Therefore, we at the museum have prepared this exhibition to introduce hangul in ways that will interest the general audience as well as foreign visitors to the museum and help inspire fascinating thoughts about the present and future of hangul.”

The exhibition runs until June 3 at the Special Exhibition Hall of the National Hangeul Museum in central Seoul. Admission is free. The museum provides a guided tour in English (Wednesday), Chinese (Thursday) and Japanese (Friday) at 2 p.m. upon reservation. For more information, visit www.hangeul.go.kr or call (02) 2124-6322.