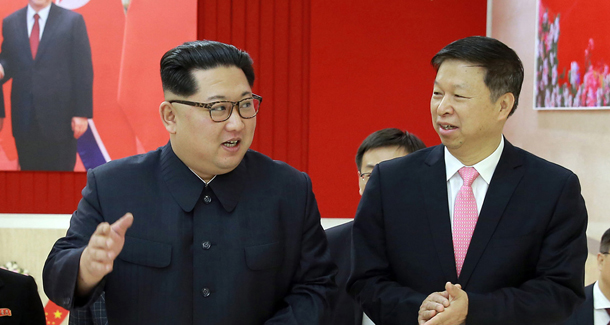 The meeting suggests stronger bilateral ties after Kim Jong-un made a surprise visit to Beijing last month and met Chinese President Xi Jinping in his first trip outside the country as North Korea’s leader.

In its report Sunday, the Korean Central News Agency (KCNA) did not specify what Kim discussed with the Chinese diplomat, Song Tao, but Kim was reportedly “pleased” with the recent improvement of Pyongyang-Beijing relations and expressed hope that ties would improve further.

The two countries’ relations had been icy since China complied with international sanctions against trade with North Korea last year in response to nuclear and ballistic missile tests.

Kim on Saturday vowed to solidify the bond between North Korea’s Workers’ Party and China’s Communist Party through high-level exchanges. Song, head of the International Department in the Communist Party’s Central Committee, reportedly replied that it was the Chinese government and Communist Party’s “firm policy” to work toward improving relations between both countries.

In his meeting with Song, Kim said he hoped the occasion would herald a “new era” of cultural and people-to-people exchanges between the two countries. The 34-year-old leader described his visit to China last month as “unforgettable” thanks to the “warm comradeship” of the Chinese.

Kim hosted a dinner banquet for Song and the art troupe on Saturday in Pyongyang, where North Korea’s Samjiyon Orchestra played music and Song and Choe Ryong-hae, vice chairman of the Workers’ Party’s Central Committee, made a toast to improve North-China relations, the KCNA reported. In attendance were China’s ambassador to North Korea, Li Jinjun, and other diplomats from the embassy, as well as Kim Yo-jong, Kim Jong-un’s younger sister and first vice director of the Workers’ Party’s Central Committee, and other top-ranking North Korean officials.

Kim’s meeting with Song was in stark contrast to last November, when the Chinese diplomat visited Pyongyang as a special envoy to President Xi to inform Kim’s government of outcomes from the Chinese Communist Party’s recent congress.

Then late last month, Kim made an unannounced visit to China on the invitation of Xi, where the two discussed issues pertaining to the Korean Peninsula. North Korean media has since been lauding ties with China, a move that local analysts believe is Pyongyang’s effort to build negotiating power with the United States when Kim meets President Donald Trump in May or June for the first summit between a North Korean and American leader.

Sunday marked the 106th birthday of North Korea’s late founder Kim Il Sung, Kim Jong-un’s grandfather, but the regime kept its celebrations low-key this year, refraining from launching a ballistic missile or holding a military parade as in the past.

The change may be related to upcoming summits with South Korea and the United States, in which Kim has promised to hold talks about some form of denuclearization.