The KBO passed two milestones this weekend - the fourth game ever to be canceled due to the air condition and the millionth fan through the gates at the league’s 10 stadiums this season. Much like those records, the results this weekend were a mixed bag, with some of the most promising teams this season still continuing to struggle. 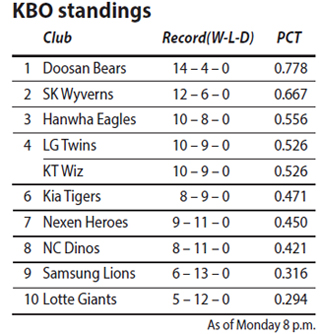 Despite spending the least amount of money signing players, the Doosan Bears continue to dominate the KBO for its second straight week with 14 wins and just four losses.

From April 3 at Jamsil Baseball Stadium, southern Seoul, to Friday at Gocheok Sky Dome, western Seoul, the Bears were on an eight-game winning streak. Though the Nexen Heroes ended the Bears’ first streak of the season on Saturday 6-7, Doosan bounced right back, concluding the weekend with a 3-2 win against the Heroes.

The LG Twins are on a roll of their own, winning five straight games since April 10. Having only lost one game last week, all five of the Twins’ starting pitchers have picked up quality starts. During the weekend series against the KT Wiz, the three starting pitchers - Cha Woo-chan, Henry Sosa and Im Chan-kyu - only gave up four runs while pitching a total of 34 innings.

Though the Lotte Giants and the Kia Tigers only got to play one game over the weekend, the Giants finally started to show hints of their potential, beating the Tigers 8-4 on Friday in Gwangju. Up until the bottom of the eighth the Giants were losing 4-1, but an impressive seven runs at the top of the ninth, including Lee Byung-kyu’s three-run home run, allowed the Giants to take their fifth win of the season.


The NC Dinos are headed in the opposite direction. The Dinos, who have advanced to the postseason for the past four years, have now lost nine games in a row, the worst losing streak in the club’s history.

Cha Woo-chan of the LG Twins may have disappointed fans as he struggled at the beginning of the season, but he has successfully redeemed himself with a victory on Saturday against the KT Wiz at Jamsil Baseball Stadium in southern Seoul.

Not only was it Cha’s second win of the season, but his quality start allowed the Twins to continue their winning streak throughout the weekend. As Cha only gave up a run and four hits while pitching seven innings, he picked up his first quality start of the season and lowered his ERA to 6.19.


It was initially unclear whether Cha would be starting this season, as he returned from spring training earlier than the rest of the team due to pain in his elbow. As a result, Cha did not pitch in any of the exhibition games. 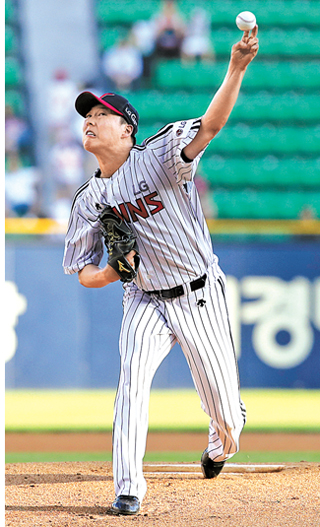 Despite concerns, Cha picked up a win in his first game of the season against the Kia Tigers on Mar. 31. However, Twins fans weren’t satisfied with Cha’s win, as it seemed more like luck. Cha gave up four runs in five innings yet still won.

When Cha started in his second game against the Lotte Giants on April 7, he took a big loss, giving up six runs in four innings. As a result, Cha’s ERA shot up to 10.00.

But Cha didn’t disappoint fans in his third game. Though he gave up a solo home run to Yoon Suk-min at the top of the second, he pitched five scoreless innings until the seventh and tossed a total of 98 pitches. During the game, Cha’s fastest pitch was recorded at 143 kilometers (88 miles) per hour.

After spending 11 seasons with the Samsung Lions, Cha signed a four-year deal with the Twins at 9.5 billion won ($8.8 million) in 2017, the largest deal for a pitcher in KBO history. Cha recorded a 3.43 ERA in his first season with the Twins.