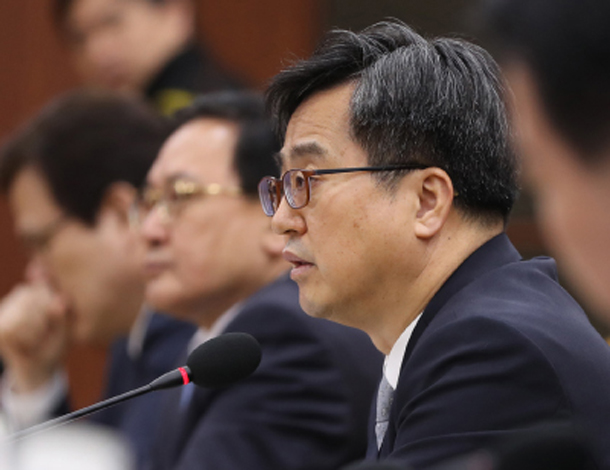 Finance Minister Kim Dong-yeon speaks during a meeting at the government complex in central Seoul on Monday. [YONHAP]

Finance Minister Kim Dong-yeon claimed that Korea’s tough job market has nothing to do with the recent minimum wage hike, instead blaming it on unusually high employment last year and corporate restructuring.

“The job market isn’t favorable, which, including new hires, decelerated to 100,000 in both February and March, and youth employment is getting worse,” the nation’s chief economic policymaker said during a ministerial meeting held Monday. “But it is difficult to say this was affected by the minimum wage hike, but rather due to unusually high employment during the same period a year ago and restructuring in the shipbuilding and automotive industry.”

The finance minister stressed that the supplementary budget could help improve the situation.

“I desperately appeal to the National Assembly and politicians in both the ruling and opposition parties,” Kim said. “The supplementary budget that will be targeted at supporting areas struggling due to restructuring is closely tied to people’s lives and youth employment. And as such, it should be dealt swiftly, separated from other political issues.”

According to Statistics Korea, 100,000 more people had a job in February compared to the same month a year earlier.

In March, 110,000 more people were employed compared to the previous year.

These figures are disappointing compared to previous months, when the increase was between 200,000 and 300,000.

The unemployment rate hit a 17-year high for the month of March at 4.5 percent, a 0.4 percentage point increase from a year ago.

It was the second consecutive month that the unemployment rate was above 4 percent.

Market experts have blamed the higher minimum wage for the lack of work, especially in industries with a high number of part-time jobs, such as restaurants and convenience stores.

In March alone, 96,000 jobs in wholesale and retail disappeared, a 3.5 percent decline compared to a year earlier. In February, 92,000 positions were terminated.

When adding the accommodation and restaurant service businesses, a total of 250,000 jobs have disappeared in the last two months.

The government’s 3.9 trillion won ($3.63 billion) supplementary budget has remained on the National Assembly’s floor for 10 days since it was submitted on April 6. The government has been pushing for the budget to pass within this month so that it can be used as soon as possible.

The finance minister also addressed corporate restructuring, in particular the ongoing struggle at GM Korea. He said the government will work on a measure that would normalize the company, especially considering the increasing burden on the automaker’s suppliers.

“We urge the interested parties, including the labor union, to reach an agreement as soon as possible under the principle of sharing the burden,” Kim said.

While management has set a deadline on the agreement by April 20, GM could file for court receivership if the labor union continues to oppose the restructuring plan.