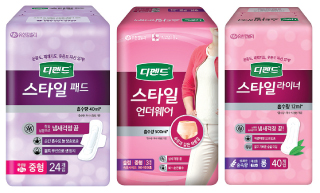 Convenience store GS25 recently launched sales of incontinence pads at branches nationwide as part of an initiative to expand the number of elderly consumers shopping at its stores in a rapidly aging society.

The company announced Monday that it has started to stock three products, varying in size and shape, from the Yuhan Kimberly brand Defend in stores across the country.

GS25 had sold Defend products at limited branches near large hospitals and senior care centers before, but decided to expand distribution nationwide under an initiative to attract more senior customers this year.

While the products are typically sold in large boxes, the versions stocked at GS25 are much smaller and more discrete, only containing three pads per box - just like the sanitary pad boxes sold at conveniences stores.

“Korea’s population is rapidly aging and there’s no doubt that the silver generation will rise as an important customer base,” the company said.

With the hope of increasing familiarity among senior consumers, GS25 plans to continue to expand the number of products sold at its branches targeted at older customers. The retailer plans to introduce more than 20 products by the end of this year, including a monitoring device to detect glucose levels and health supplements targeted at elderly people.

The drive to gain ground among senior consumers may seem an unusual move for an industry where the main customer base is young consumers in their 20s and 30s. This age group still account for 60 percent of convenience store consumers and sales, which is why products and marketing are mainly targeted at the trends and lifestyles of young consumers.

The percentage of customers over 50 years is much smaller. At CU, only 10 percent of all customers were over 50 last year. Most seniors generally prefer discount chains or supermarkets with more space and a larger selection of products.

But in the future, convenience stores are likely to see a growing number of older consumers due to Korea’s rapidly aging population, as well as the stores’ ubiquity.

This is already happening in Japan where the number of people aged above 65 hit 25 percent in 2014. Around that time, leading convenience store brands such as 7-Eleven and FamilyMart saw people aged 50 and older take up 30 percent of all customers. In line with the demographic shift, companies adapted prices and even placed nursing care consultants at some branches.

Last year, the population aged above 65 accounted for 14.2 percent of all Koreans. Statistics Korea estimated that this proportion will reach 20 percent by 2025.

But older customers may be more familiar with convenience stores than the numbers suggest.

“It’s been almost 30 years since convenience stores were first introduced to Korea,” said a GS25 spokesman. “The consumers who were our main targets back then are now in their 50s.”