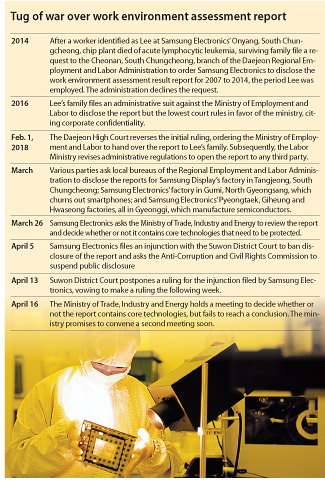 The Ministry of Trade, Industry and Energy on Monday failed to determine whether reports on the working conditions of employees at Samsung Electronics factories contain any technology-related information that could deal a heavy blow to the semiconductor manufacturer if made public.

The world’s top chipmaker asked the ministry last month to review the content of the so-called work environment assessment result report, which contains information about the extent to which workers are exposed to hazardous materials and the frequency of exposure at its chip plants. The request came after the Ministry of Employment and Labor ordered Samsung to disclose the reports for chipmaking facilities in Onyang, South Chungcheong, and a smartphone plant in Gumi, North Gyeongsang, by Thursday.

“We have decided to convene an additional meeting to go through the report in a more concrete and in-depth manner,” said the ministry.

“Given that the issue involves the Labor Ministry’s order and Samsung Electronics is worried about its core technologies leaking, we will try to finalize the review as soon as possible,” said a ministry official.

Samsung has to comply with the order unless the Suwon District Court accepts its injunction to block the disclosure before the deadline. The Trade Ministry has two more days before reaching its conclusion, but the Labor Ministry could proceed with its decision regardless.

The Labor Ministry’s order follows a ruling in February from the Daejeon High Court in favor of the family of an employee who died of leukemia while working on semiconductors at the Onyang factory. The family initially filed the request two years earlier.

Subsequently, civic groups and journalists rushed to ask the ministry to order Samsung to unveil reports, not only for semiconductor plants but also smartphone and display factories across the country - from Gumi to Gijeung, Hwaseong and Pyeongtaek in Gyeonggi - and the ministry accepted the requests.

The ministry called together one of its officials, a National Intelligence Service official and 13 semiconductor experts to see if the report contains any of the seven technologies that either have technological and economic value in markets at home and abroad or have great growth potential as stipulated in the Act on Prevention of Divulgence and Protection of Industrial Technology. If leaked abroad, they could have a malicious impact on national security and the economy.

Samsung Electronics has been striving to block the disclosure of the report, fearing technological leakage. Kim Ki-nam, president of Samsung’s device solutions division, told reporters on April 6 that opening up the report to the public would be tantamount to “relaying the chipmaking know-how piled up over the past three decades to China.”

Samsung is the largest semiconductor producer in the world after snapping up the top spot from Intel, but China has proven to be a formidable force as it braces to push into the memory device market with ample capital to invest in production capacity.

The ongoing debate over the work environment assessment report dates back to 2014, when a worker identified as Lee at a chipmaking line of Samsung Electronics’ Onyang plant died of acute lymphocytic leukemia. The surviving family asked the Cheonan branch of the Daejeon Regional Employment and Labor Administration to order Samsung Electronics to disclose the report during the period Lee was employed.

Under the Occupational Safety and Health Act, business operators should submit the report every six months to the Labor Ministry, but Samsung has refrained from following the rule, citing “business and operational confidentiality.”

The report is supposed to include a simplified factory layout, the number of employees per production line, the names of each line and process, the types of hazardous chemicals used for fabrication, their manufacturers, and the result of testing the materials.

Chip production is known to encompass a wide variety of hazards. Work processes - from wafer manufacturing to fabrication and packaging and testing - include the use of hazardous materials. But not much is known about the full range of potential health effects of exposure. Display and smartphone production also requires similar processes.

After a lengthy legal battle, the high court in February ordered Samsung Electronics to give the report to Lee’s family and the Labor Ministry went a step further, amending related regulations to make it possible for the public to access the report.

Both the Labor Ministry and Banolim, a civic group representing the relatives of those who have caught diseases or died after working at Samsung factories, insist that the court ruling already acknowledges the content of the report not belonging to the business- and operation-related secrets.

“The list of hazardous materials in the report is the same as so many other products and the factory layout for disclosure is very simple,” said Lee Jong-ran, a certified labor consultant who works for Banolim.

On the contrary, semiconductor industry insiders say experts can guess Samsung’s unique core technologies just by browsing the names of the chemicals used and factory layout.

“The government should find a way to protect corporate secrets at the same time as meeting demands from the victims of industrial accidents,” said Cho Dong-geun, professor of economics from Myongji University. “Reckless disclosure will hurt the company as well as the nation.”

Other companies in the semiconductor, display and battery industries could also be affected by the Labor Ministry’s order because they all use chemical substances and are not free from industrial accidents occurring during the manufacturing process.