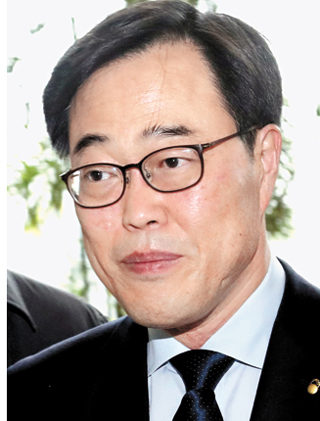 Kim Ki-sik, the head of Korea’s financial watchdog, resigned after the National Election Commission (NEC) determined on Monday that he violated laws related to political contributions by rushing to donate his money to a think tank months before his term ended as a lawmaker.

The Blue House said it would accept his resignation.

After a meeting that lasted over four hours, the NEC concluded that Kim, who took over as governor of the Financial Supervisory Service (FSS) at the start of this month, had given about 50 million won ($46,500) from his political coffers to a think tank called “A Better Future” that comprised first- and second-term lawmakers in the Democratic Party, including himself.

Kim faced calls to step down from the post after revelations that he burned through his political donations over the last five months of his term in early 2016. He has also garnered criticism for three overseas trips sponsored by financial institutions he was supposed to oversee as a lawmaker in 2014 and 2015. An NEC official said such trips should “be avoided” because they bear “elements of illegality” but made no explicit comments on their legality.

The NEC’s judgement and Kim’s subsequent resignation came four days after President Moon Jae-in’s office requested the election commission determine whether Kim’s actions during his years as a representative violated any laws.

President Moon had said on Friday that he would dismiss Kim if the NEC found he violated any laws, or if his behavior at the time fell short of the ethical standards expected from National Assembly members.

With the NEC’s judgement on Monday, Kim’s tenure at the powerful agency in charge of overseeing Korea’s financial industry came to an end just two weeks after he took the post. The political left had hoped Kim would be a strong reformer.

In a statement on Friday, President Moon admitted that it would have been easier for him to choose someone from the bureaucracy as FSS chief to pass the scrutiny of opposition parties, but he said a bold appointment was necessary to reform Korea Inc.