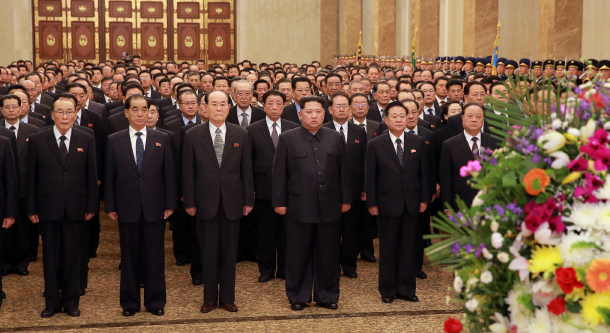 North Korean leader Kim Jong-un, third from right in front row, pays respects to his grandfather Kim Il Sung, the country’s founder, with other officials at the Kumsusan Palace of the Sun, a mausoleum for the Kim family, on Sunday to mark Kim Il Sung’s 106th birthday. The regime kept its celebrations low-key this year, refraining from launching a ballistic missile or holding a military parade as in the past. Kim Jong-un has promised a moratorium on nuclear and ballistic missile tests ahead of summit meetings with South Korean President Moon Jae-in and U.S. President Donald Trump. [YONHAP]