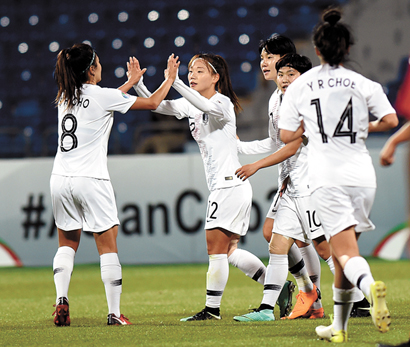 The Korean women’s national football team celebrates after Jang Sel-gi, second from left, scores against the Philippines at the Amman International Stadium in Jordan on Monday. [XINHUA/YONHAP]

The Korean women’s football team defeated the Philippines 5-0 in the fifth-place match at the Asian Football Confederation (AFC) Women’s Asian Cup at Amman International Stadium in Jordan on Monday. By defeating the Philippines, Korea qualified for the 2019 FIFA Women’s World Cup in France.

“This is just the starting point,” said head coach Yoon Duk-yeo after the match against the Philippines.

Korea got off to a great start with Jang Sel-gi and Lee Min-a scoring in the first half. The Taeguk Ladies extended their lead in the second half, as Lim Seon-joo added a goal and Cho So-hyun scored two.

The AFC Women’s Asian Cup also served as the final qualification for the 2019 FIFA Women’s World Cup, with the top five teams automatically qualifying. Since the team failed to advance to the semifinals by finishing third in the group matches, their only hope of qualifying was to claim fifth place. They were the last team to secure a spot in the World Cup.

“From young players to veterans, they played together as a team to secure a good result,” Yoon said. “It would have been better to advance to the semifinals [by finishing second in the group matches], but I don’t have any regrets. Our players fought well until the end. They didn’t give up.”

The women’s football team will make their second-straight appearance at the World Cup, for the first time in the country’s history, and will compete for the third time since Korea first qualified for the World Cup in 2003.

Though the team missed their spot in the semifinals, their trip to the AFC Asian Cup was a success as far as Yoon is concerned, as they showed stable defense throughout the tournament to play all five matches without giving away a single goal. Korea was the only team among the eight participating countries to not concede a single goal.

Korea was assigned in Group B with Australia, Japan and Vietnam, where it played a scoreless draw against sixth-ranked Australia and 11th-ranked Japan while picking up a big 4-0 win against Vietnam.

“We didn’t concede a goal in all four matches,” Yoon said. “We learned not to step back against strong teams. The only disappointment I have is not scoring against Japan.”

A scoreless draw against Japan is a great improvement, as the team fell 3-2 to their eastern neighbors at the East Asian Football Federation (EAFF) E-1 Football Championship in Japan in December 2017, the most recent tournament prior to the AFC Asian Cup.

At the EAFF Championship, Korea finished last among the four participating countries by losing all three matches - against Japan, North Korea and China.

Despite starting a lot later than men’s football in Korea, the women’s team slowly made improvements in international events, advancing to the round of 16 at the 2015 FIFA World Cup in Canada for the first time and finishing third at the 2014 Asian Games. However, the women’s team’s successes were quickly forgotten.

Throughout the tournament, the center defense duo - Kim Do-yeon and Lim Seon-joo - showed great leadership while Yoon Young-geul successfully stepped into the shoes of absent goalkeeper Kim Jung-mi. Not only that, Jang, who scored an equalizer against North Korea at the AFC Women’s Asian Cup Group B qualifier in March 2017, proved that big tournaments don’t faze her as she scored South Korea’s first goal during the match against the Philippines.

“We’ll work on our problems and weaknesses and prepare for the World Cup,” Yoon said.

The Korean women’s football team will return to Korea today, except for the four players - Ji So-yun, Cho So-hyun, Lee Min-a and Choi Ye-seul - who play for foreign clubs.