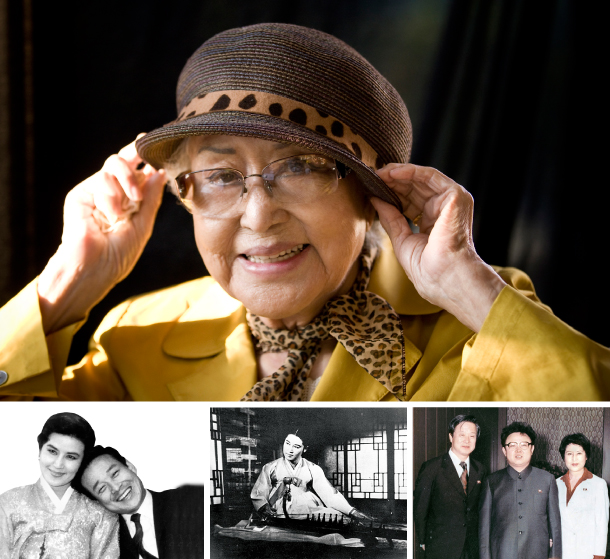 Actor Choi Eun-hee, top, an iconic actor in the 1950s and ’60s, died on Monday. Choi was married to late film director Shin Sang-ok, far left, and starred in his movies such as “Seong Chun-hyang” (1961), middle. Above right is Choi and Shin with former North Korean leader, Kim Jong-il. [JOONGANG ILBO]

Choi Eun-hee, an iconic film actor who was active in the 1950s and ’60s, died Monday afternoon after suffering from years of chronic kidney disease. She was 92.

She is known not only for being a leading lady during the so-called golden age of Korean film in the 1960s, along with her husband, filmmaker Shin Sang-ok, but also for being kidnapped by North Korea in 1978 and escaping the communist country in 1986.

“She passed away this afternoon after going to the hospital for a kidney dialysis treatment,” director Shin Jeong-gyun, Choi’s eldest son, said on Monday.

Choi had been fighting kidney disorders since the early 2010s. Her health was reported to have worsened following the death of her husband Shin in 2006. She is survived by two sons and two daughters.

Choi met Shin while working on the 1953 documentary “Korea.” The two married the following year and became big names in the film industry. Together, the pair made a number of well received films, including “Mother and a Guest” (1961), “Seong Chun-hyang” (1961) and “Sangnoksu” (1961). Choi was a prolific actor, and appeared in around 130 movies until 1976.

Choi was also Korea’s third female film director. Her directorial efforts include “The Girl Raised as a Future Daughter-in-Law” (1965) and “An Unmarried Teacher” (1972).

Other than her work, Choi is known for having been abducted to North Korea.

The two were abducted on the orders of the late North Korean dictator Kim Jong-il, and were forced to spend their time in the communist country helping to develop its film industry. With Kim’s support, the two filmed 17 films during their eight years in the North. One of them, “Salt,” was invited to Moscow International Film Festival in 1985, where Choi clinched the Best Actress award.

But the pair made a miraculous escape during a visit to Vienna in March 1986. The two ran to the U.S. Embassy while visiting Austria, which was a rare opportunity the pair obtained after spending years trying to gain trust from the late North Korean leader.

Due to their popularity, the couple’s abduction drew interest in Korea and throughout the world. Their story was made into a documentary, “The Lovers and the Despot” (2016), by British filmmakers Ross Adam and Robert Cannan.

Following their escape, the pair sought asylum in a third country for about 10 years. The couple remarried during that period.

In 1999, Choi returned to Korea, and devoted herself to developing the local entertainment industry. In 2001, Choi took office as the head of theatrical company Shinhyup, and produced the musical “Crazy for You” the following year.

Choi’s funeral is being held at St. Mary’s Funeral Hall in Gangnam, southern Seoul. Her coffin will be borne out on Thursday morning.