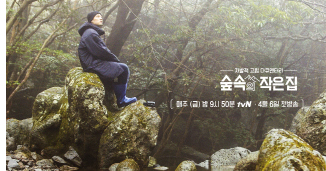 Created by star producer Na Young-seok, the program on cable channel tvN scored 256 on the weekly Content Power Index (CPI) for April 2 to 8.

It features the serene everyday lives of two of the nation’s hottest heartthrobs - actors So Ji-sub and Park Shin-hye - in remote forests on the southern resort island of Jeju. They are required to fill the day by completing missions and doing the very basics to sustain a life, such as cooking, making a fire and chopping firewood.

As with Na’s other popular reality programs, most recently “Youn’s Kitchen,” the new series seeks to give comfort to viewers by showing celebrities living slow-paced, peaceful lives, either in exotic locations or in the wild, a type of laid-back, vacation-like lifestyle that is only temporarily available for busy Koreans.

With 4.7 percent and 3.2 percent for the first two episodes, “Little House” is still short of Na’s previous highly popular shows. But the producer said that it is not aiming at a high viewership rating.

“As ‘Youn’s Kitchen 2’ was successful, the network gave us this one chance to do whatever we wanted to make,” he said half-jokingly at a press event earlier this month. “I’ve already told the two cast members that the show might fall flat.”

Despite the lower-than-expected ratings, the show has been much talked about on social media where the viewers discuss how they can connect with the two stars who find happiness by making small achievements, like carving wood into clothes hangers.

The top honor on the TV rating chart went to “The Miracle We Met,” a TV series on KBS 2TV starring Kim Myung-min, Kim Hyun-joo and Ra Mi-ran. Written by popular scriptwriter Paik Mi-kyung of “Strong Girl Bong-soon” and “The Lady in Dignity,” the drama tells a story about an extremely confused man who has to live in the body of a complete stranger with the same name, age and birthday but a completely different life. The drama scored 274.7 on the CPI.