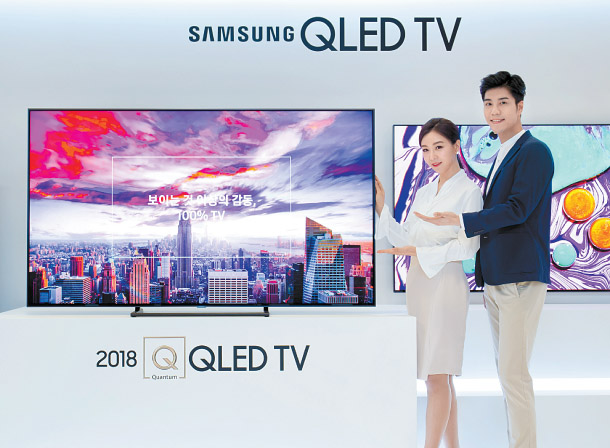 Samsung Electronics is doubling down on its TV strategy despite tough competition from rivals’ more popular OLED screens.

“We will maintain a two-track strategy with QLED TVs and [forthcoming] MicroLED TVs,” said Han Jong-hee, head of Samsung Electronics’ visual display business at a launch event for the company’s upgraded QLED televisions held on Tuesday in Seoul. “There have been media reports saying we started research to combine organic LED technology with our QLED, but it is only one of our display affiliate’s research areas and there is no confirmed plan to commercialize it.”

Industry watchers believed that there is still room for Samsung to start making OLED TVs after facing sluggish sales for its QLED TVs.

Samsung’s QLED TVs use liquid crystal displays equipped with quantum dots, which are semiconductor nanocrystals that the company says enhance color definition. The premium TV market, however, has been leaning toward OLED TVs that do not need backlights. All other display types, including QLEDs, require them.

According to market tracker IHS Markit earlier this year, Japan’s Sony and Samsung’s local rival LG Electronics each have more than 30 percent of the global market for TVs valued over $2,500 with their OLED TV lineups. Samsung trailed in third place with an 18.5 percent share for its QLED TVs.

“It’s true that QLED TV sales have been weaker than OLED TVs, but we want to bring competition into a broader perspective than just a battle between QLED and OLED TVs,” said Choo Jong-seok, executive vice president of the visual display business at Samsung. “We hope to take more than 60 percent of the market share in the world’s 75-inch-or-larger TV market.”

According to the Korean TV maker, the market for TVs with a screen 75 inches or larger has grown at an average of 30 to 40 percent yearly, and this year about 1.8 million large-screen TVs are expected to be sold globally. Samsung hopes the competition is defined by size rather than a direct comparison between OLED and QLED.

The new QLED TVs introduced to the Korean market Tuesday are all big-screen models, with sizes ranging from 55 inches to 75 inches. Ten models are open for pre-sale, and one 82-inch model will be released in June. The prices for the pre-sale models range from 2.79 million won ($2,610) for the cheapest 55-inch Q6F model to 10.49 million won for 75-inch Q9F model.

Samsung plans to release its ultra-premium MicroLED TVs in the second half of this year. MicroLED has been mentioned as a possible successor to OLED and QLED for its power efficiency, but mass-producing the extremely expensive TVs is difficult.

Han said that Samsung definitely plans to release a 146-inch MicroLED TV, though other sizes are still being discussed. The price is expected to be well over $100,000.

While trade disputes continue between Washington and Beijing, Han said Samsung does not have plans to adjust its production in China for now.