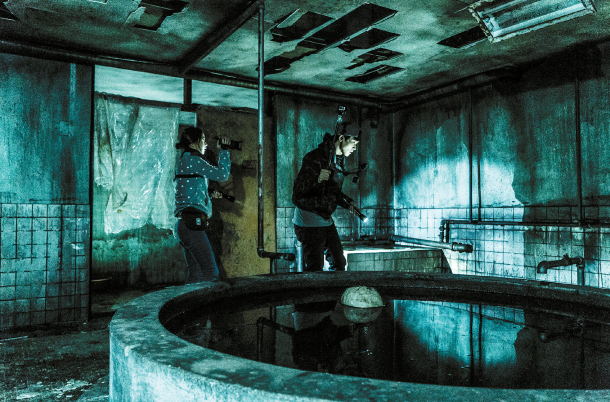 “Gonjiam: Haunted Asylum” features a group of seven people on a journey, eager to figure out a way to unlock room 402 in a psychiatric hospital. [SHOWBOX]

Director Jung Bum-shik, a renowned horror film director, is back in the spotlight for his film “Gonjiam: Haunted Asylum,” which was released on March 28. Known for his previous films such as “Epitaph (2007)” and “Horror Stories II (2013),” Jung took a different approach with his most recent film.

Set in the Gonjiam Psychiatric Hospital in Gwangju, which was one of CNN Travel’s “Seven Freakiest Places on the Planet” in 2012, this movie depicts seven people going on a journey into this spooky hospital and live streaming their experiences. By having the actors broadcast their adventure from their perspective, the film seems as if it were a live video and highlights the horrified expressions of the actors.

Since its release, the low-budget film has topped the local box office for two consecutive weeks despite heavy competition and even beat out Steven Spielberg’s Hollywood blockbuster, “Ready Player One.”

Jung sat down with Joongang Ilbo, an affiliate of Korea JoongAng Daily, to discuss the movie and a hidden Easter egg in the film. The following are edited excerpts from the interview. 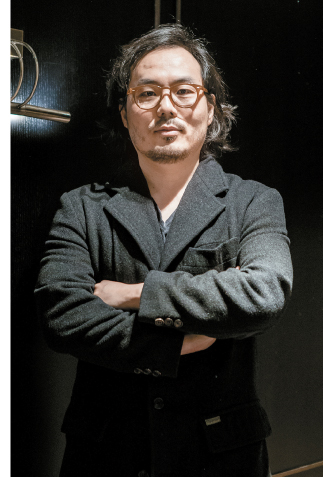 Director Jung Bum-shik is a highly-acclaimed director, known for his horror films such as “Epitaph” (2007) and “Horror Stories II” (2013). [SHOWBOX]


Q. Did you anticipate that “Gonjiam: Haunted Asylum” would be this successful?

A. On March 28, the day of the premiere, there were several highly-anticipated movies coming out as well. So, I thought that “Gonjiam” would either be a hit or a miss. I also expected that the movie would be somewhat well-received if the actual response from the audience matched that of the YouTube generation, mostly people in their 10s or 20s.


How did you come across the idea of live streaming?

People like me, in their 40’s or above, think that watching live streams is a waste of time. For example, while watching meokbang programs (live eating videos), I used to think, “Why watch others eat when I can eat [that food] myself?” However, after watching these shows with my son, a college student, and my daughter, a high school student, I felt differently about these programs. I liked how it was easy [for the viewer] to freely enjoy watching a program without having difficulty understanding what was going on. Inspired, I focused on the ideas of horror and experience and got rid of the lessons, grudges and stories that usually exist in horror movies.


Why did you set this movie in an actual hospital?

As seen on reality shows, viewers enjoy watching the reactions of celebrities. In the same sense, I thought that this mental hospital could be viewed as a single character. I wanted the audience to feel absorbed watching the reactions between the actors and the place. Thus, my purpose of doing so was to allow the audience to experience [what was happening in the film] by using all five of their senses.


Many people have posted reviews on social media. What reviews did you enjoy reading the most?

I liked the review that stated, “this is a movie in which the director is not trying to purposefully surprise the audience but rather trying to show how long fear can last.” I also enjoyed reading “I almost had a heart attack, as if I went to the Underworld.” (Laughs).


On the other hand, there were some reviews criticizing the lack of plot and dialogue between the characters. How did you view these reviews?

I predicted that there would be two contrasting responses from the audience. Regarding the lack of plot, I tried to overcome it with a hidden Easter egg.


What are the Easter eggs in this film? Have all of them been discovered?

So far, only 80% of them have been revealed. That’s much better than “Epitaph,” in which some of them took 10 years to find. There is one involving the hospital director Park Ji-a. I wanted to depict her as former President Park Geun-hye through her short hair and the water rising in room 402. Originally, I was planning to name the room “Room No. 416,” which is Park’s prison cell [number], but I changed my mind — I thought that would be too much.


After actor Lee Seung-wook’s sudden announcement that he would retire, there was a rumor that there was a spirit at the filming cite. Is this true?

Lee did not participate in promoting the film for personal reasons. He realized that the filming location at Busan Maritime High School was a castle of horror. There were no ghosts or evil spirits there, but I think he felt that way because he was in such a [spooky] place.


What kind of horror movies do you like? Are you motivated by any of them?

Instead of movies that use scary effects that pop out of nowhere, I prefer to watch well-directed movies that contain suspense, such as those of Alfred Hitchcock and Steven Spielberg. If I were to choose a single movie, I would pick Maya Deren’s surrealist experimental film, “Meshes of the Afternoon” (1943). Although it was filmed during a period when computer graphics or special effects were yet to be discovered, [the film] possesses a unique visual effect.


What are your plans for your next film?

Horror films these days are being expanded by collaborating with other genres. I received an offer to film a virtual reality (VR) horror film, but I’m not sure whether it will actually happen. The audience’s demands and the market [for horror films] have changed. Compared to other films, horror movies have less production costs, so there is less burden [for the director] to depend on the actors. However, these films heavily depend upon having a director who has expertise in that area.