In creepy ‘Quiet Place,’ the silence is essential

In creepy ‘Quiet Place,’ the silence is essential 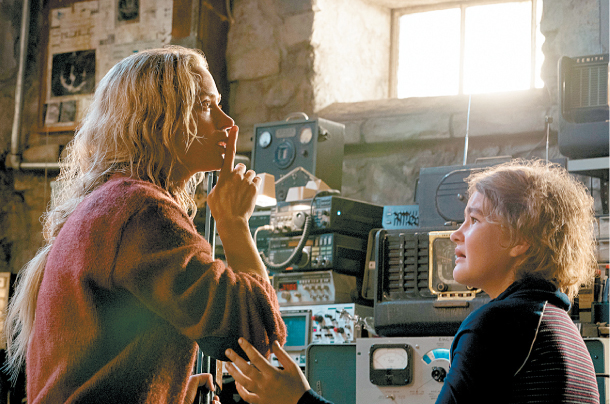 Emily Blunt, left, and Millicent Simmonds, right, in a scene from “A Quiet Place.” [AP/YONHAP]


Let’s start with a popcorn warning. If you’re bringing your usual tub of multiplex popcorn into “A Quiet Place,” just be aware that you’ll be hearing every single crunch.

That’s because much of John Krasinski’s ingeniously creepy new film, in which he stars alongside his real-life better half, Emily Blunt, takes place in virtual silence. This is a movie about a world where noise gets you killed. In fact, if you ate popcorn in the movie, you’d quickly be dead. Unless you were standing by a waterfall. More on that in a minute.

Krasinski, in his third feature outing as director, has a lot going for him here: An inventive premise (was it dreamed up by some vengeful librarian?), a terrific cast featuring two extremely effective child actors, and the always superb Blunt, who can register fear, joy, love and anxiety in one scene without needing to utter a word. He takes all this and runs with it, producing a taut, goosebump-raising thriller that earns its jump-out-of-your-seat moments and only occasionally strains its own logic - then again, who really cares? It’s a monster flick!

We begin on “Day 89.” But what exactly happened 89 days ago? Our first clue is that there’s nobody in the streets of the desolate town where the Abbott family - Lee, Evelyn and three young kids - makes a precarious shopping trip. The family ventures on foot from their farmhouse to search an abandoned store for badly needed medicine. The next clue is all the “Missing” posters on the streets. What happened to all these folks? The most obvious clue is that the family cannot speak or make a sound. They communicate in sign language and walk barefoot on soft sand and dirt so even their feet won’t give them away.

An early, shocking tragedy makes it clear what they’re up against: evil, hungry monsters who consume anyone who catches their attention with sound. Soon, that fateful Day 89 skips ahead to Day 472. The monsters still rule, and now Evelyn (Blunt) is pregnant. As the family goes about its soundless daily routines - cooking meals silently, eschewing the washer-dryer for hand washing, playing board games with soft pieces, dancing to music on headphones - one wonders how they’ll possibly bring a baby into the world without making noise.

Krasinski and fellow screenwriters Bryan Woods and Scott Beck are cleverly tapping into universal parental angst here. First, childbirth, already pretty darn painful and stressful, is made even more difficult - you can’t even scream! And how on Earth can you keep a newborn from crying? More broadly, there’s the constant fear for Lee and Evelyn that any daily task can lead to an errant noise, and quickly, death. What’s worse than feeling like you can’t protect your child? “There’s nothing to be scared of,” Lee (Krasinski) tells young son Marcus reassuringly at one point, as they leave the house. “Of course there is,” the boy replies, correctly.

Basically the only place where one can talk freely, in this world, is next to the roaring waterfall where Lee takes Marcus (an appealingly sensitive Noah Jupe) one day. Because the waterfall is louder than they are, they can holler with abandon. They’ve left older sister Regan at home to help Mom. Despite her obvious smarts and instincts, Regan is technically at even greater risk from the evil creatures, because she is deaf and can’t hear them even if they’re right behind her. To survive, she will need to be more resourceful than anyone else in the family. (Regan is embodied with warmth and poignancy by young deaf actress Millicent Simmonds).

Remember we said this movie earned its jump-out-of-your-seat moments? There’s one in particular, involving Blunt, that is applause-worthy, and you’ll know it when you see it. There’s also a terrifying sequence in a grain silo, reminiscent of the movie “Witness,” and an errant nail sticking out of a wooden plank is used quite (ouch) effectively.

“A Quiet Place” may not have the weighty social meaning or piercing comedy of another recent high-profile horror thriller, “Get Out.” But like that movie, it is smart, it moves fast, it has a hugely satisfying ending - and it deserves to attract a much broader audience than the usual horror film devotees.

But just watch out for that popcorn. Crunch too loud, and you’re a goner.