In North, questions over what’s in a name

In North, questions over what’s in a name 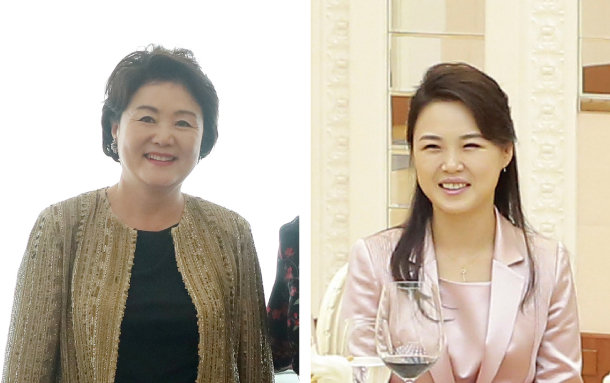 As the leaders of North and South Korea prepare to meet next week, one question is on the mind of many Pyongyang watchers: Will the North Korean media refer to South Korea’s first lady by her name?

The decision is a dicey one in a state that reveres its ruling family. The South Korean first lady, Kim Jung-sook, bears the same name in Korean as North Korean leader Kim Jong-un’s grandmother, Kim Jong-suk, who is beloved in the country as the wife of the state founder Kim Il Sung. In North Korea, where the cult of personality surrounding the Kim family is strong, their names are treated as sacred and cannot be used by other people.

“Those who were named Kim Jong-un were ordered to change their names after Kim took power in late 2011,” said Kim Hak-min, a North Korean defector who escaped the North in 2011.

North Korea’s state-run media has praised Kim Jong-suk, who died in 1949 at age 30, as a heroine who bravely fought against the Japanese alongside Kim Il Sung during World War II.

When the country celebrated her 100th birthday last December, the government issued commemorative stamps that cited her “ever-lasting contribution to Great Leader Kim Il Sung’s master plan” for the nation. A state-owned textile company, the Pyongyang Kim Jong Suk Silk Mill, is named after her.

In what may have been an attempt to avoid using the matriarch’s name, North Korean state media only referred to the South’s Kim Jung-sook as “President Moon Jae-in’s wife” in its recent coverage of the preparations for the summit.

A senior Blue House official told the Korea JoongAng Daily that the presidential office was “not aware” of whether the first lady’s name had ever been mentioned by North Korean media.

Experts say that the North Korean media will have a hard time deciding whether to call the South Korean first lady by her name, especially if Ri Sol-ju, the wife of Kim Jong-un, accompanies her husband for the April 27 summit.

If Ri comes, she is expected to meet with Kim Jung-sook at the border village as a diplomatic protocol, leaving the North Korean media with little choice but to name her.

“If Ri comes along, the North Korean media will certainly mention her name in its coverage of the summit,” said Kim Keun-sik, a professor of political science at Kyungnam University, “and that will make it really difficult not to mention Kim Jung-sook by name.”

But the North Korean media could still find a way to get around the linguistic hurdle, he said, by continuing to refer to her as President Moon’s wife.