Shin Tae-yong is starting to feel the pressure

Shin Tae-yong is starting to feel the pressure 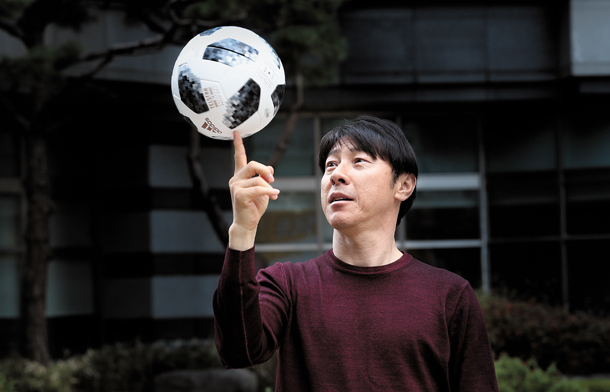 Head coach Shin Tae-yong poses with a football during an interview in Bundang, Gyeonggi, on Tuesday. [LIM HYUN-DONG]

With less than 50 days remaining until the 2018 FIFA World Cup in Russia, head coach Shin Tae-yong and his team are working harder than ever, trying to figure out a strategy that uses Korea’s strengths to take the lead.

Korea has one strength that Shin is particularly interested in - Son Heung-min.

Though he is still keeping the World Cup roster under wraps, Shin isn’t scared to admit that a lot of his plans revolve around Tottenham Hotspur’s Son. This season Son has scored 18 goals for Spurs, but he has a history of failing to follow through for the national team. Shin thinks the secret might be bringing a touch of Tottenham to the national team, so he’s copied Spurs’ 4-4-2 formation.

“Rather than having one player stand out, everyone needs to play together and make room for others so they can have great flow throughout the match,” Shin said.

At the World Cup, Korea is assigned in Group F with Sweden, Mexico and Germany.

The JoongAng Ilbo met with Shin on Tuesday to hear about his preparations for the World Cup.

Q. You seem stressed. How different is it coaching the national team?

A. I would be lying if I said I don’t have any concerns. Since I was appointed as the national team coach, I’ve banked my entire football career on qualifying for the World Cup. The pressure I’ve been getting is nothing like when I managed the U-20 Korean national football team or the national team for the Olympics.

If we didn’t qualify for the World Cup, we might have taken a ship back to Korea from Uzbekistan. Though we still received a lot of criticism after successfully advancing to the World Cup for the ninth consecutive time, I’ve been staying strong only because of the pride of the achievement. I keep on telling myself that I need to be stronger in preparation for the World Cup.

Including your career as a player, this is your very first time competing at the World Cup. How do you feel?

There are 23 players on a team but only one manager, so this is a greater opportunity.

Do you have a lot of concerns regarding the final World Cup entry?

About 80 percent is complete and we’re looking for the 20 percent. I’ve chosen about 15 to 16 players that can be our starters. The biggest decider in national team selection is whether the player would sacrifice himself for the team or not. Since there isn’t a team that is weaker than us at the World Cup, we need to be a cohesive group. If a player is not willing to commit, then I won’t add him to the roster, no matter how good of a player he is.

What are the concerns you have for each position?

At the moment, I am most concerned that left back Kim Jin-su has injured his knee. Unlike with his club [Jeonbuk Hyundai Motors], Hong Jeong-ho struggled in friendly matches in Europe. I will also have to check how prepared Ju Se-jong and Lee Myung-joo are physically after military training. There’s also Go Yo-han, who didn’t compete at the European friendlies.

The fans and the media have been paying close attention to how you will utilize Son. Have you come up with a strategy yet?

We’re trying to implement the 4-4-2 formation that Tottenham uses. Son gets a lot of chances when playing for Tottenham because they have great players like Harry Kane, Dele Alli and Christian Eriksen.

Kwon Chang-hoon and Hwang Hee-chan competed at the 2016 Rio Olympics and have been playing well with their clubs. What do you think?

Kwon is quiet but has a sincere attitude. Hwang is not tall but has an aggressive style of playing. He doesn’t fall behind when competing against taller players. I’m expecting the two to play a significant role at the World Cup. The Austrian League, which Hwang plays for, finishes on May 20 but I asked the Salzburg manager, when I met him in February, to release Hwang earlier if the club guarantees their league victory prior to the end of the season.

Why was Lee Chung-yong [of Crystal Palace] excluded from the national team from the March friendlies?

I talked about Lee with [Crystal Palace manager] Roy Hodgson on the phone. Hodgson was highly complementary of Lee, saying that he is a player that is ready to play at any time. Lee has been playing in Europe for nine seasons and has been to the World Cup twice. If he’s willing to sacrifice himself for the national team, there is a possibility of him getting added to the team.

There are still concerns regarding an unstable defense, what do you think?

I feel bad for Jang Hyun-soo for receiving personal criticism [from fans]. The coaching staff are always on the lookout for players and we haven’t found a better defender than Jang. We’re still in process of coming up with a strategy that can cover up individual weaknesses in defense.

Isn’t the team’s first game against Sweden [on June 18] the most important match?

Whichever teams we play against, they all have a weakness. Sweden plays long ball, but this is also their weakness. The return of veteran striker Zlatan Ibrahimovic has been receiving a lot of attention. But [the return of Ibrahimovic] may have a negative influence on the team. His addition may work out better for us [than for Sweden].