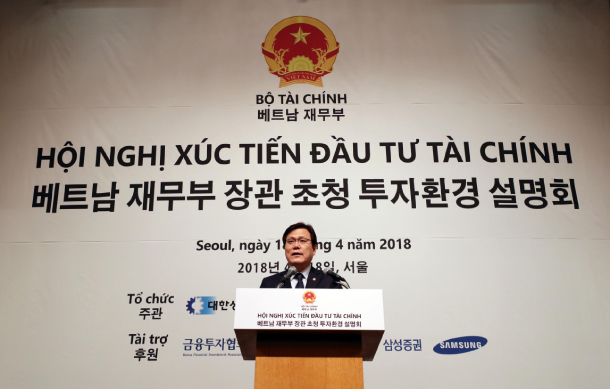 The nation’s economic chiefs pledged to strengthen bilateral cooperation with Vietnam in infrastructure projects, corporate restructuring and financial technology, or fintech, on Wednesday.

Choi, who accompanied the president on the March visit, reiterated that Vietnam is an important pillar of this administration’s diplomatic strategy of improving relations with Association of Southeast Asian Nations (Asean) countries.

“Vietnam is the most important partner in the financial sector in carrying out the initiative,” Choi said during an investment briefing for Korean and Vietnamese businesses held at Lotte Hotel in central Seoul.

“Vietnam has the third most Korean companies operating in the world after the United States and China,” he added, “We will keep expanding cooperation in the fintech area based on the memorandum of understanding with Vietnam’s central bank.”

Sharing experiences of corporate restructuring and management of non-performing assets will also be in focus, Choi said, since Korea managed to navigate economic crises in both the late 1990s and in 2008.

The Vietnamese minister called for Korean corporate players to pay attention to sales of Vietnam’s state-run companies in process of privatization.

“We are open to foreign investment while we push for privatization of state-owned companies,” Dung said, “I hope to see more investment coming from Korea in the process.”

In a separate meeting, Kim and his counterpart discussed ways to work together on Vietnam’s large scale urban projects and ICT development.

Kim asked for more Korean companies to participate in Vietnam’s infrastructure building, such as the development of Long Thanh International Airport.

Another suggestion by Kim was a voluntary program in which young Korean engineers could be sent to Vietnam to share knowledge in technology and engineering.

The Moon administration announced its “New Southern Policy” last year to strengthen commercial, cultural and interpersonal exchanges with Asean countries to the level of those with the United States, China, Japan and Russia.

Analysts believe that the strategy is to diffuse diplomatic and commercial risks when relations with certain countries carry outsized weight.

In the meantime, Kim and Choi also held a meeting on Wednesday to reaffirm their two agencies’ willingness to proceed with reforms despite the resignation of the chairman of Korea’s financial watchdog.

Kim Ki-sik stepped down from his post heading the Financial Supervisory Service after the National Election Commission determined that he violated laws on the use of political donations.