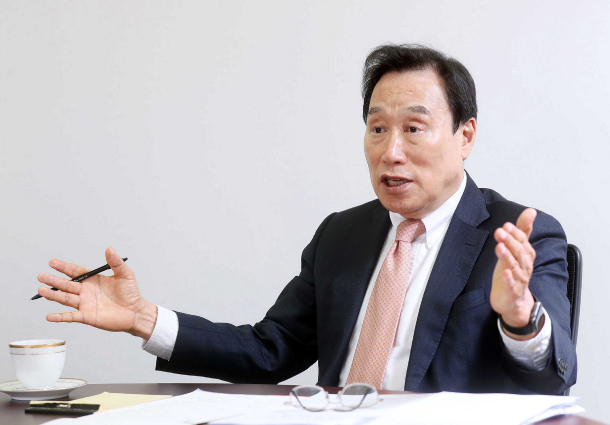 President Moon Jae-in’s approval ratings have been steady, hovering between 60 percent and 70 percent. That makes it easy for the administration to proceed with its goals, including abolishing “past evils” by putting two former presidents behind bars on corruption charges and following through on its signature economic policies.

Korea is experiencing its worst unemployment rate since the financial crisis in the late 1990s. The number of unemployed surpassed 1 million in March. The drastic increase in the minimum wage, reduction in working hours and conversion of contract workers into regular workers are making companies reluctant to hire new employees.

But the liberal policy experiment doesn’t show signs of stopping as the key policy figures at the Blue House stick to their guns. Kim Kwang-doo, the vice chairman of the National Economic Advisory Council, has assumed the role as the “devil’s advocate” in this administration. The 71-year-old reports to President Moon, chairman of the council, and he doesn’t hesitate to make bitter comments.

He sat down with the JoongAng Ilbo, an affiliate of the Korea JoongAng Daily, after returning from a trip around the world to check out global trends. Kim shared his views on how the Korean economy could be revived.

A former professor of economics at Sogang University, Kim gained fame as an economics tutor for now-impeached former President Park Geun-hye. But he never became part of the Park administration.

“The Park administration’s economic policy has failed,” he said. He went on to join the presidential campaign of President Moon Jae-in and created the key vision for so-called J-nomics, the Moon government’s human-centered economic policies. Later. he assumed his current post, offering advice to the president on ongoing business issues.


Q. What made you travel around the world?

A. When it comes to the 1997 currency crisis and 2008 global financial debacle, Korea was entirely a babe in the woods, not knowing what was going on across the globe. Other countries were saying in unison that Korea was having a hard time but Korea insisted it was fine, given its strong fundamentals. Then a backlash hit Korea. It’s not wise to talk about economic policies without knowing the global trends or the perspective of global leaders well. That’s why I tried to form an organic relationship with various think tanks around the world. I intend to propose the best policies to the president.


Where did you visit?

I visited Brookings Institution, Peterson Institute for International Economics, New York Federal Reserve Bank and Goldman Sachs in eastern part of the United States and two venture capitals firms in Silicon Valley. In Europe I went to Chatham House and Max Planck Institute. In China I stopped by the Development Research Center for State Council.


What did they say?

They showed a deep interest in the minimum wage increase. Since the pace of increase is too rapid, the number of the unemployed will increase in the short run. But since Korea is not in a stage to proceed with industrial activities on the basis of low salaries, it will spur restructuring in the long term, the experts said. The premise is that Korea should adjust its industrial structure and educate workers further.


The fears over the minimum wage became a reality.

You need to wait at least six months until you see whichever policy works out. After seeing the result in the first half, the government may adjust the policy.


What are other countries doing about the minimum wage?

In France and Germany, what commonly counted for labor unions was not the wage. I could see that they were focused on job security and sustainability. I think Korean society also should pay attention to that.


Why did it happen?

You need to look at the background. Germany had an aggravated economy after reunification. It saw a large number of unemployed, which spread the notion among the general public on how important it was to retain jobs. Japan also went through the “lost 20 years” and France also had its national economy in deadlock for 10 years, which events led them to realize the importance of job security.


Seems like the situation is extremely different from Korea.

Job positions can be maintained only when there are works to be done. That in turns means the company you work for needs to be competitive. But the situation isn’t good in Korea. China has been pushing ahead with the “Made in China 2025” initiative and if it succeeds, our industrial competitiveness will be even more threatened and job positions will shrink even further. At that point Korea may gain the perception that the labor community in Germany and Japan have.


Wouldn’t we be losing the optimal timing?

Our economy is already losing dynamism. China is seeing 15,000 new-born companies every day, which compares to 49,000 per year for Korea. Since we barely have new companies, investments are nearly nil. To revive the dynamism, we should be bold to kill the industries that have lost competitiveness and relocate human and other resources to promising businesses.


We are already in a serious situation. The rust belt is spilling over from Busan to Geoje and Ulsan.

The trillions of won spent on the shipbuilding industry is stuck there and cannot be migrated to new businesses.


What is the solution?

Restructuring doesn’t simply work with economic logic in any country in the world. That’s why unemployment policies should be part of comprehensive economic policies in which all related ministries and even local autonomous governments should participate. That way, we can minimize the opposition from laborers and local politicians.


Do you think the only solution to real estate speculation is limiting the demand?

When you go to Gangnam, there are a lot of hospitals, schools, subway stations and art centers. If Gangbuk, or northern Seoul, has a similar number of such facilities, there will be new supply.


Even the cooperation within the government doesn’t seem to be working out.

Convergence is the mainstream, trend now but the government organizations cannot communicate with each other. Ministries should cooperate on issues to find the best solution.


The campaign by the government to get rid of past evils also seem to be influential.

Even if the president orders de-regulation, civil servants won’t budge for fear they could be punished in the next administration. We should form an environment in which they can be more proactive. Those who work with creativity should be exempted from responsibilities.