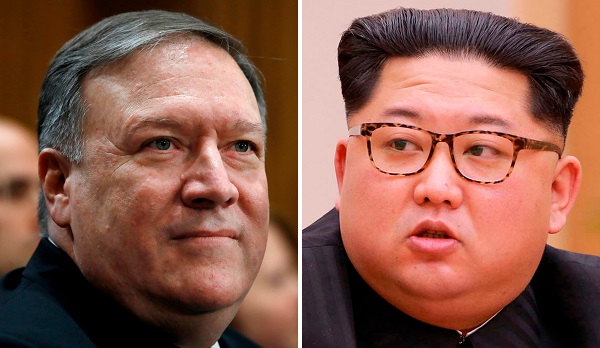 Mike Pompeo, the CIA director and secretary of state nominee, made a clandestine visit to North Korea at the beginning of April as an envoy for U.S. President Donald Trump to meet with leader Kim Jong-un, according to reports.

The Washington Post first reported Wednesday, citing two people with direct knowledge of the trip, that Pompeo’s top-secret visit was part of an effort to lay the groundwork for direct talks between Trump and Kim about North Korea’s nuclear weapons program.

CNN reported that Pompeo was only accompanied by intelligence officials on the Easter Sunday trip, with no White House or State Department officials.

Trump said last week that he would hold talks with the North Korean leader sometime in May or early June.

He also told reporters that there are five locations being considered for what would be a historic U.S.-North summit.

“North Korea is coming along,” said Trump, speaking at his Mar-a-Lago resort in Florida on Tuesday ahead of a summit with Japanese Prime Minister Shinzo Abe. “South Korea is meeting, and has plans to meet, with North Korea to see if they can end the war. And they have my blessing on that.”

He added, “People don’t realize the Korean War has not ended. It’s going on right now. And they are discussing an end to the war,” referring to the three-year Korean War, which ended in 1953 with an armistice agreement.

Abe was in the United States for a two-day meeting with Trump.

Pompeo, who is considered to be more hard-line than predecessor Rex Tillerson, during his confirmation hearing to become top U.S. diplomat told the Senate Foreign Relations Committee last week that he is “optimistic” Trump and Kim could have a conversation on denuclearization and pave the way to “achieving a diplomatic outcome” that “America and the world so desperately need.”