For archer Jung Dasomi, it’s good to be back

For archer Jung Dasomi, it’s good to be back

Jung Dasomi is returning to Korea’s national archery team after failing to qualify for the past three years. 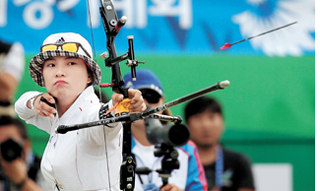 Jung Dasomi competes in the women’s individual gold medal match against Chang Hye-jin at the 2014 Asian Games in Incheon. [YONHAP]

In 2014, Jung won gold at the Asian Games, but she fell into a long slump afterward. In 2015, she finished last in the third round of qualifiers for the national team, and the following year, she didn’t even get to the first round.

Now, she’s hoping to win gold again at the Asian Games in Jakarta this August.

During a qualifying event at the Jincheon National Training Centre in North Chungcheong on Monday, Jung finished fourth. She will be the only member of the team this year to have gone through the full eight-month qualification process since members of the national team from the previous season go straight to the final qualifiers.

“It feels different,” Jung said. “It was very difficult and long, but I’m glad it’s concluded well. Though it’s not done yet, I’m happy to get another chance.”

At the 2014 Asian Games, Jung was dominant. She finished first in the national team qualifiers and won gold in singles and the team event.

For the next three years, she struggled to get back on the team.

“It was very difficult because that was the first time I struggled that much,” Jung said. “I really wanted to compete at the Rio Olympics, but I had to accept the result the way it is.”

In 2015, Jung met coach Lee Eun-kyung, who helped her get through the slump. Lee is considered a legend in Korean archery. Throughout her career, she has won three gold medals at the Asian Games, three golds at the World Championship and one Olympic gold in the team event at the 1992 Summer Games.

“It was harder for her to get herself out of the struggle because she had too many thoughts,” Lee said. “Since I went through a similar time in my career, I wanted to teach her ways to enjoy the sport.”

“I relied heavily on the result,” Jung said. “But Coach Lee told me to find peace of mind. Through talking to her, I learned to accept the result and focus on myself.”

Although Jung has earned a ticket to Jakarta, she still has more work to do. The national team consists of four players, but only three get to compete in the team event, and only the top two can compete in individual events.

The Korea Archery Association determines these players based on the number of points they receive at the national team qualifiers, World Cup events and Asian Games qualifier.

Currently, Jung is at a disadvantage. She finished the national team qualifiers last among her teammates.

“It is difficult, but I’ll enjoy the challenges ahead of me,” Jung said. “I’ll prepare well in the remaining tournament, and I hope to compete at the Asian Games once again.”