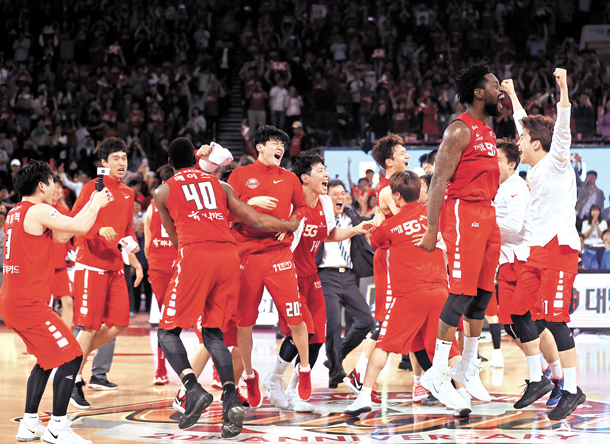 The Seoul SK Knights celebrate after defeating the Wonju Dongbu Promy to win the 2017-18 KBL Championship on Wednesday. [YONHAP]

After heading into the fourth quarter tied up at 64-64, the Knights took a 79-70 lead with less than four minutes remaining in the game. But the Promy didn’t give up on the championship series yet, bringing the score up to 79-77 with 45 seconds left in the game.

After Deonte Burton missed a pass from Yoon Ho-young, the game was the Knights’ to lose. The Knights added another point after making one of two free throws. This is the Knights’ first championship victory in 18 years, since they last won in 2000.

“After the game, I had bruises and cuts from getting stepped on by other players [as part of their celebration], but they are honorable injuries,” Kim said. “I feel happier than when I won gold at the 2014 Incheon Asian Games.”

During the championship series, Kim mostly played in the fourth quarter.

“Kim Sun-hyung seemed to be getting tired physically, so I let him play towards the end,” said the Knights’ head coach, Moon Kyung-eun.

The Knights fans nicknamed Kim “Flash Sun” for his fast playing style and showy dunks. Kim, who made his KBL debut in 2011, is the Korean national basketball team’s dominant point guard, but he struggled this season with an injury. During the Knights’ game against the Ulsan Hyundai Mobis on Oct. 17, Kim ruptured a ligament on his right ankle. He had to have surgery and sat out 12 weeks of the season. Though the injury was serious and could have forced Kim to sit out the entire season, he returned to the court for the end of the season.

While in rehab after surgery, Kim said he was able to look back at the course of his career.

“When I was watching the game from my room, I saw something different,” Kim said. “The flow of the game and the players’ characteristics on the court seemed new.”

Though Kim only played in nine games during the regular season, the long absence allowed him to prepare him for the playoffs and the championship series. To avoid a repeat of the 2012-13 KBL championship series, in which the Knights were defeated after losing four straight games, he worked harder than anyone.

Kim’s hard work paid off. After the Knights lost the first two games, Kim came out to the court like a completely different player in the third game, leading the Knights to victory. Kim continued his role as the Knights’ captain, leading the team to an incredible four straight wins.

“Once we finally won, I just started crying,” Kim said. “All the difficulties I’ve been through, including the time I struggled with an injury, just went through my head. We won because our players worked together as a team.”

This is the first championship as a coach for the Knights’ head coach Moon, who was appointed in 2011. His last victory was when he played for the Seoul Samsung Thunders during the 2000-01 season.

Terrico White won the Championship MVP award, as he averaged 25 points with 5.3 rebounds and 7.5 assists per game throughout the six championship games. White became the first foreign player in 15 years to win the MVP award for the KBL Championship.

Despite winning the first two championship games, the Promy’s starting players fought through injuries in the championship series. Kim Joo-sung, who played for the Promy for 16 years, hoped to end his career with a championship victory, but his team fell short.