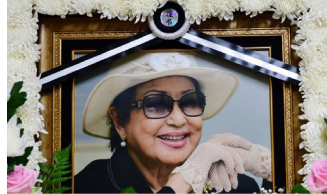 The funeral for Choi Eun-hee, the late South Korean actress who was once kidnapped by North Korea to create propaganda films before escaping, was held on Thursday and attended by her family and close friends.

Choi, a South Korean film icon of the ’60s and ’70s, died on Monday while receiving kidney dialysis treatment at a hospital in Seoul. She was 92.

A private Catholic funeral service was held for Choi at the Catholic University of Korea’s St. Mary’s Hospital in Seoul early Thursday. The service was attended by some 100 family members, friends and retired colleagues from her heyday.

The actress was later laid to rest next to her late ex-husband and filmmaker Shin Sang-ok at a Catholic cemetery park in Ansong, Gyeonggi.

In 1978, Choi was kidnapped by a North Korean secret agent. She was forced to make films for the North together with Shin, who was also abducted several months later.

Choi won the best actress award at the Moscow Film Festival in 1985 for “Sault,” which she made together with Shin, becoming the first Korean to claim an award at an overseas film festival.

In 1986, the two escaped from North Korea to the United States and returned home permanently in 1999.