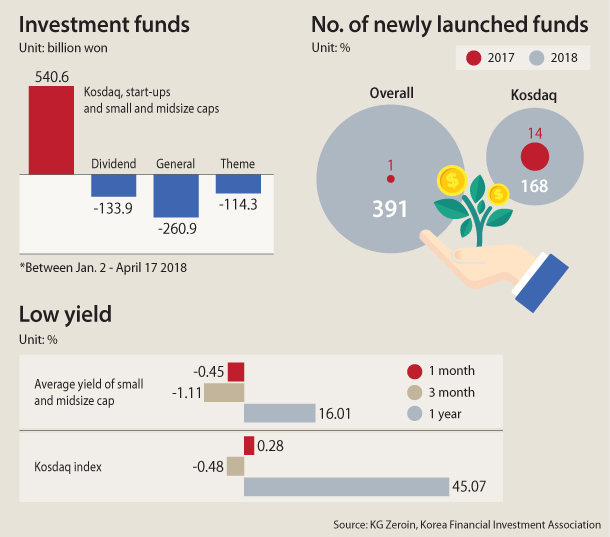 The new Kosdaq Venture Funds have attracted more than 1 trillion won ($942 million) in the first nine days, the latest sign of the Kosdaq’s growing popularity among investors.

According to the Korea Financial Investment Association, 14 of the 168 newly released funds between March 17 and April 17 were focused on the Kosdaq or small and medium caps. About half of those funds were the new Kosdaq Venture Funds that are eligible for government tax benefits.

Although, at 8.3 percent, the number of funds focusing on the Kosdaq may not seem impressive, compared to the past, it is still a major improvement.

Of the 391 funds that were launched between March 17 and April 17 in 2017, only one offered Kosdaq investment.

In just a year, the tables have turned as large cap funds have lost their popularity while Kosdaq funds have been steadily seeing increased interest from investors.

One reason is believed to be the Kosdaq Venture Fund, part of a government policy to boost the secondary market. The fund, introduced on April 5, promises a 10-percent tax break on investment up to 3 million won and the preferential allocation of newly-listed shares.

But market experts say there’s more behind the recent interest in Kosdaq investment funds, especially since the beginning of the year.

According to KG Zeroin, a fund rating and consulting company, as of Tuesday, 540.6 billion won of net investments have been made on small and medium caps listed on the Kosdaq. Investments on the secondary market saw a surge in 2015 amounting to 1.75 trillion won.

Investors turned cold toward the Kosdaq in 2016, with 294.3 billion won flowing out of the market. Last year, the market recovered slightly with a net investment of 166.5 billion won.

Renewed interest in the Kosdaq is largely due to the bullish growth that the market has been enjoying compared to the larger Kospi.

As of Tuesday, the Kosdaq index has risen 45.07 percent compared to a year ago. During the same period the Kospi was able to only see an increase of 15.11 percent.

The bullish growth of the Kosdaq has attracted investors to the market. The growth in investors has, in turn, contributed to the growth of numerous funds, with popularity getting a further boost after the government announced the Kosdaq Venture Fund.

Market experts say the current momentum will likely continue for the time being as the government has issued a number of policies aimed at supporting start-ups, which typically trade on the Kosdaq.

“Because of the government policy that is focused on start-ups on the Kosdaq, it is likely that investment in Kosdaq related funds will continue,” said Shin Hyun-ho, head of NH Investment & Securities product planning department. “However, investors have to take notice that the Kosdaq is volatile [compared to the Kospi].”

In fact, Kosdaq funds are considered to be high risk investments among financial products.

Additionally, which companies a fund is investing in and what investment strategies are employed can dramatically impact the yield.

The yield on small and mid-size cap funds hasn’t lived up to investors’ expectations recently.

While the Kosdaq index, as of April 17, has risen 0.28 percent in a month, the one-month yield of small and mid-size cap equity funds have registered a 0.45 percent loss. The situation isn’t that different for one-year yield funds either. The Kosdaq has risen 45.07 percent in a year while the yield of one-year funds has been 16.01 percent.

“When choosing a Kosdaq fund, one needs to carefully look into how well the funds have been managed in the past and what strategies the fund mangers employed,” said Lee Min-hong, team leader of Korea Investment & Securities’ product strategy.