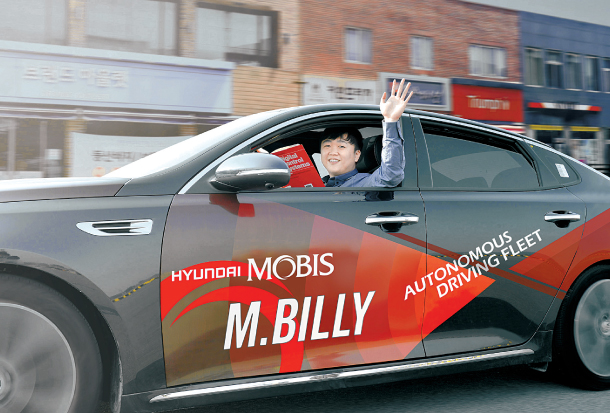 Hyundai Mobis will soon start testing Level 3 and 4 functions of its autonomous-car components and software on the roads of a test track in Michigan. It plans to extend tests to Korea and Germany in the next few months.

The leading auto parts manufacturer announced Thursday that M.Billy, a nickname for Kia Motors’ K5 models equipped with auto-driving components, will embark on Level 3 and 4 test drives this month at a proving ground in Michigan - the U.S. state that auto giants like GM, Ford and Chrysler call home.

Level 3, the so-called “eyes off” stage on the widely used SAE International scale, allows drivers to safely turn their attention away from the road. At this level vehicles can handle certain emergency situations like sudden braking. Level 4 vehicles are able to drive on their own without human control.

Proving grounds appear almost identical to actual roads. They allow automakers to test the function and safety of vehicles in an environment very similar to real driving conditions. Successful testing on the proving ground will take M.Billy one step closer to driving on real roads alongside human-driven vehicles.

“Accidents can occur even for test drives and the trials on proving grounds are aimed to more thoroughly prevent safety problems,” said a Hyundai Mobis spokesman.

Autonomous cars are required to receive government licenses in order to conduct tests. Hyundai Mobis has obtained approval from Michigan’s state government in 2016 and is expecting to have a license issued next month in Korea. A license in Germany is expected in June.

The M.Billy model being tested in Michigan will be fitted with 24 Hyundai Mobis sensors from eight different categories. Sensors are a critical technology in self-driving vehicles, taking on the role that human eyes play in recognizing the road and surroundings.

Obtaining a license for autonomous cars from different governments is a complicated job, says Hyundai, because the requirements and regulations differ. For example, in Germany every autonomous vehicle has to have a black box capable of recording operation and accident reports.

For manufacturers in the self-driving car sector, especially those that hope to become global players in the new market, getting permission to test-drive vehicles on foreign roads is a necessary step to gain information and data on different driving environments.

The more data an autonomous car has, the better it can drive.

The auto parts maker plans to expand the number of M.Billy cars this year to 10 from the current three to boost development. It will also expand the size of its R&D work force by 15 percent every year until 2021. Hyundai Mobis currently has 600 researchers working on autonomous vehicle components.

“The goal is to start mass production of a system for Level 3 autonomous vehicles based on our sensors,” said Hwang Jae-ho, Hyundai Mobis director of DAS Engineering Group.