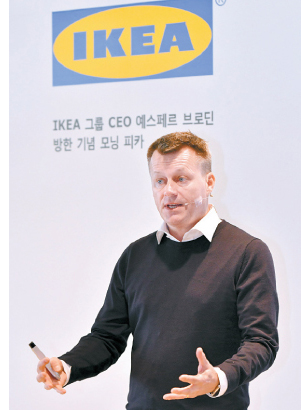 Swedish furniture giant Ikea is planning to open a number of small city stores in Seoul, a significant departure from the suburban mega stores that the company typically favors.

“We will [continue to] make our big stores more and we will make them better for our customers, but we will also find a way for those people who find it difficult to access Ikea at city centers,” said Ikea CEO Jesper Brodin said at a press event held Thursday at Ikea’s branch in Goyang, Gyeonggi.

Brodin, who became CEO last year, has been driving the introduction of city stores around the world as part of Ikea’s new future strategy. His visit this week marks the first time that a CEO of the Swedish company has visited Korea since it launched its first store here in 2014.

The new approach is an attempt to ensure Ikea’s survival in a more urbanized and digitalized society where more people live in cities and are less willing to travel in order to shop - a shift that has already had a disastrous impact on a number of out-of-town retail giants like Toys ‘R’ Us.

Ikea Korea’s Retail Manager Andre Schmidtgall said the local office is conducting tests and trials to find the best format and concept to attract city dwellers in the country.

On possible concerns that Ikea Korea’s move to the city might eat up sales of local furniture stores and nearby merchants, Schmidtgall said despite similar concerns when the Gwangmyeong store first opened, a recent survey of merchants within a 5-kilometer (3.1-mile) distance showed a 10 to 25 percent sales increase.

He added that Ikea’s role in expanding awareness of home furnishing has led to the growth of other players in the industry as well.

Another major task left for Ikea Korea is introducing online services - also part of the group’s global initiative to develop its digital sector. Ikea’s Korean website currently shows photos and information of the brand’s products but does not receive orders from customers. Purchase orders can be only placed at the two brick-and-mortar stores.

“We believe [that] we can start e-commerce this financial year,” said Schmidtgall. Ikea Korea’s financial year ends in August. The local office’s spokesman added that when the service is launched, products will be available for delivery all over the country.

Ikea Korea is also continuing to grow its classic business model. The company finalized purchases of land in Giheung in Gyeonggi, Gyeryong in South Chungcheong and Busan, and is waiting for discussions with local merchants and government approval.

“The enormous success we had in Korea is fantastic - not only in furniture, but I think we’re [also] at the top when it comes to the food,” said Brodin. “We didn’t know people would love meatballs in Korea - turns out the people in Korea love the meatballs more than in Sweden.”