Trump pledges to make the summit ‘a worldwide success’

Trump pledges to make the summit ‘a worldwide success’

U.S. President Donald Trump pledged Wednesday that he will do “everything possible” to make an historic summit with North Korean leader Kim Jong-un “a worldwide success.”

Trump said that he is “looking forward” to a meeting with Kim “in the coming weeks to discuss the denuclearization of the Korean Peninsula,” in a press conference at the Mar-a-Lago resort in Florida, alongside Japanese Prime Minister Shinzo Abe, wrapping up their two-day summit. 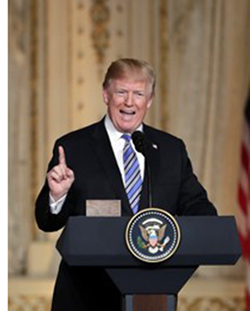 Earlier, Trump confirmed that his secretary of state nominee, Mike Pompeo, director of the Central Intelligence Agency, made a top-secret visit to North Korea at the beginning of the month to meet with Kim ahead of the summit being planned to take place in May or early June.

Trump added that he would not head into a meeting that he does not think would have a successful outcome, and that he also would have no qualms about walking away from talks if they don’t head in the right direction.

“If we don’t think it’s going to be successful, we won’t have it,” Trump said. “If the meeting when I’m there isn’t fruitful, I will respectfully leave the meeting.” But he emphasized that he will always remain “flexible.”

Trump said that he would not repeat the mistakes of previous administrations and that Washington’s “campaign of maximum pressure will continue until North Korea denuclearizes.”

But he described the first-ever U.S.-North summit as an “historic moment, and possibly beyond that if it works out properly.”

“We’ve never been in a position like this with that regime, whether it’s father, grandfather or son,” he said, referring to North Korea’s founder Kim Il Sung, his son Kim Jong-il and his grandson, the current leader. “And I hope to have a very successful meeting.”

In a shift of tone from his previous threats of a potential military option on the North and boasting of the size of a “nuclear button,” Trump described a vision of a safe, prosperous and peaceful Korean Peninsula and global nuclear disarmament.

“We hope to see the day when the whole Korean Peninsula can live together in safety, prosperity and peace,” Trump said. “This is the destiny of the Korean people, who deserve and have gone through so much over the years. We hope it all works out; we’ll be trying very hard.”

Trump pointed to a “bright path available to North Korea when it achieves denuclearization in a complete and verifiable and irreversible way,” adding “it would be a great day for them” and for the world.

Washington has maintained that its goal is the complete, verifiable, and irreversible denuclearization (CVID) of North Korea, though it remains to be seen if the two sides will be able to see eye-to-eye on any timeline and verification procedures. Kim Jong-un, according to the Chinese government, proposed a “phased, synchronized” approach to achieving peace and denuclearization of the Korean Peninsula in his first summit with China’s President Xi Jinping in Beijing at the end of last month.

Trump acknowledged Beijing’s role in enforcing sanctions on Pyongyang, adding, “President Xi understands that this is a very important set of months that are lying ahead. He doesn’t want to see a Korea, North Korea, or any Korea that has nuclear weapons either.”

He also thanked Abe for his support in the pursuit of the “dream of a peaceful, nuclear-free Korea.”

“It was my involvement and the involvement of our great country that made the [PyeongChang Winter Games] a very successful Olympics,” Trump asserted, adding that South Korean President Moon Jae-in has been “generous” in acknowledging this.

“We have to get it together,” said Trump on North Korea. “We have to end nuclear weapons, ideally in all parts of the world. That would be a goal for all of us to hope for and cherish.”

Trump also said in an earlier lunch meeting with Abe that Mike Pompeo “just left North Korea,” as he confirmed in a Tweet after news broke that the CIA director had met with Kim over Easter weekend, soon after being nominated by the president to replace former Secretary of State Rex Tillerson. Pompeo, said Trump, “had a great meeting with Kim Jong-un, and got along with him really well, really great.”

Trump described his confidence in Pompeo, who has yet to be confirmed as the top U.S. diplomat by the Senate, adding that he’s “very smart but he gets along with people.”

Trump said Tuesday that five locations are being considered for the summit with Kim. When asked if Seoul had been aware of Pompeo’s clandestine visit to North Korea, Noh Kyu-duk, spokesman of the Ministry of Foreign Affairs here said in a briefing Thursday, “South Korea and the United States maintain close cooperation on the Korean Peninsula issue, especially on the North Korean nuclear problem.”

Susan Thornton, the U.S. acting assistant secretary for East Asian and Pacific Affairs, is scheduled to visit Seoul from Sunday to Tuesday to speak with Korean Foreign Ministry officials to discuss the North Korea nuclear issue. She will then visit Tokyo from Tuesday to next Friday.

Noh said on Thornton’s visit to Seoul, “We look forward to in-depth discussions on successfully holding the South-North and U.S.-North summits, how Seoul and Washington can cooperate for North Korean denuclearization and the establishment of peace on the Korean Peninsula, South Korea-U.S. relations and the alliance and the regional situation.”