More people coming to Korea to have babies

More people coming to Korea to have babies 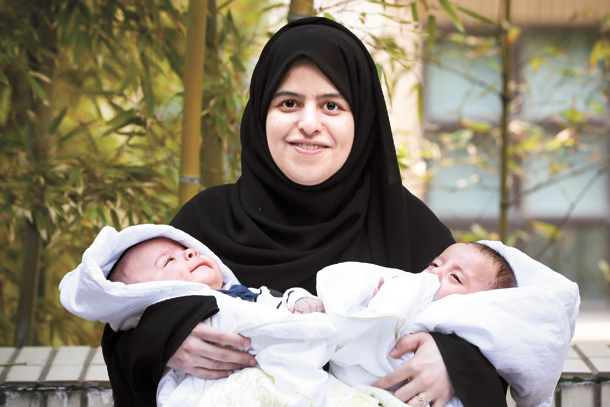 Amal Ahmed with her twins at Gangnam CHA Hospital in Seoul. After seven years and five miscarriages, she was able to give birth in Korea last year through a government-funded program in the United Arab Emirates. [KIM KYUNG-ROK]

Amal Ahmed spent seven years trying to conceive a baby. She went through five miscarriages in her home country of the United Arab Emirates (UAE), in one case losing a child six months into her pregnancy, and doctors couldn’t explain why it was happening.

Finally in November 2016, she and her husband, Omar Al-Hosani, decided to try an option of last resort: have a baby in Korea.

Through a UAE government program, couples are able to receive financial support for fertility treatments in overseas medical facilities. Travel and lodging expenses are included. Ahmed and Al-Hosani decided to undergo treatment at Gangnam CHA Hospital in Seoul on the recommendation of a friend who had successfully given birth there.

They were able to take leaves of absence from work and booked a long-term stay at a residential hotel near the hospital.

Their doctor was Chang Eun-mi, and an initial examination found that Ahmed’s ovaries were underperforming and her uterus was contracting more than it should. “It would be difficult for Amal to get pregnant, much less maintain her pregnancy through natural means,” Dr. Chang recalled.

Doctors tried everything medically possible, including medication and surgical intervention. Finally, they settled on in vitro fertilization. The embryo was transferred to her uterus last May, and in October, she gave birth to twins Zaid and Rashid.

Both babies came out premature - the oldest was just 610 grams (1.3 pounds) and the youngest 670 grams - but after some time in the special care unit, they became healthy enough for discharge.

Now, after a year and five months in Korea, the couple will be returning home with their two newborns.

Over 1,300 foreign patients visited Gangnam CHA Hospital for fertility treatments last year. Other fertility clinics such as the ones at MizMedi Hospital and Cheil Hospital are also receiving patients from abroad.

According to the Ministry of Health and Welfare, 20,145 people visited Korea last year to receive fertility treatment, up from 5,656 in 2010. They still make up only 5 percent of the more than 300,000 medical tourists who come to Korea, mostly for cosmetic surgery and skin treatments.

Korean fertility care has become attractive for its high quality relative to cost. For foreign patients without health insurance, a procedure like in vitro fertilization usually runs in the range of 6 to 7 million won ($5,700 to $6,600). “Similar treatments in Europe or the United States cost twice as much or more,” said Dr. Chang of Gangnam CHA Hospital.

At MizMedi Hospital, Russians make up about 80 percent of their foreign patients, according to the head gynecologist, Kim Gwang-rye. “Many of them encounter success in Korea after experiencing failure in Europe or other places,” the doctor said.

The hospitals’ non-medical services, including translation and lodging, also contribute to their popularity. Ahmed said she had “no issues communicating with the medical staff” because there was an Arabic translator, “and the hospital provided much help with adjusting to difficulties living in Seoul such as food.”