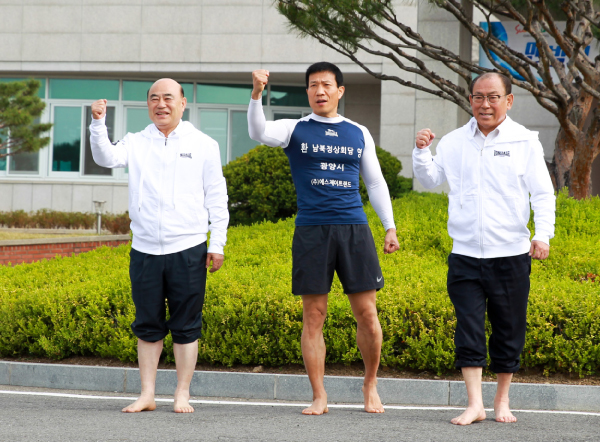 Jo Seung-hwan is doing his part to promote the cause of reunifying the Korean Peninsula - by walking barefoot from his hometown in South Jeolla to Paju, Gyeonggi, near the border between the two Koreas.

The barefoot activist began his walk in earnest last Tuesday to mark the occasion of South Korean President Moon Jae-in and North Korean leader Kim Jong-un meeting for the first time. His walk is scheduled to end around the same time as the inter-Korean summit, the first in over a decade, on April 27.

Jo started his journey in Gwangyang, a city on the southern tip of Korea’s southernmost province, and worked his way up to Imsil County in North Jeolla. He plans to continue north, hugging the country’s east coast in Gangwon before ending in Paju.

"I believe it sends the message that we can always overcome our adversities," Jo said.

The avid 50-year-old hiker is not new to this. He’s organized barefoot walks before whenever he feels strongly about a social or political cause. In particular, North-South relations have particular resonance.

"Because my grandfather was a Korean independence fighter [during World War II], I have great interest in social issues," Jo said.

For some of these missions, he receives donations from various organizations, which he gives away to children in hospitals.

Last November, Jo walked over 60 miles barefoot to mark 100 days until the PyeongChang Winter Olympics. To commemorate the March 1 Korean independence movement, he hiked up Mount Halla, the tallest mountain in South Korea at over 6,000 feet, also in hopes of reunification.

Jo’s day job is director of a sports company in Seoul, but a bout with debt and near brush with death led him to barefoot walking.

"In 2008, around the time when the Lehman Brothers went bankrupt, I tried to earn money through stocks and borrowed money to invest from people around me,” Jo said. “But instead, I fell into great debt."

At the time, his health was also deteriorating. In dire straits, Jo decided to take his own life. He climbed a nearby mountain, intending to jump off, but when he reached the top, he felt his hope restored. He had been able to summit more than 2,400 feet on his own. The thought lifted his spirits.

Since then, Jo has been consistently exercising and hiking barefoot after hearing about its health benefits. Every day, he runs up and down the 23 floors of his apartment building 10 times and hikes Mount Dobong, where years ago he almost took his own life.

This September, Jo plans to hike Mount Paektu on the Chinese border barefoot. His eventual dream is to make it to the top of the Himalayas.

"This is my way of spreading awareness about South-North relations and wish for the peaceful reunification of the Koreas," he said.