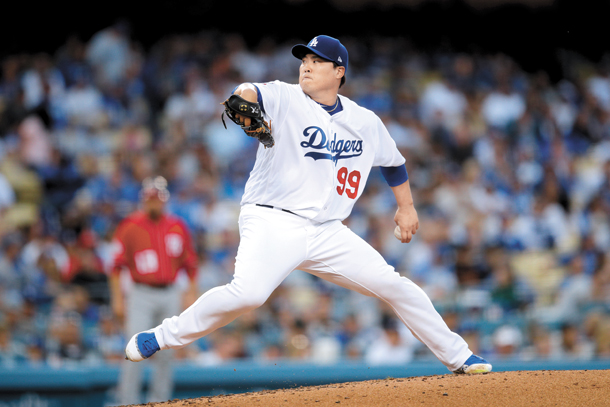 Ryu Hyun-jin of the Los Angeles Dodgers pitches against the Washington Nationals during the fourth inning at Dodger Stadium on Saturday. [AP/YONHAP]

The Los Angeles Dodgers’ starting pitcher Ryu Hyun-jin won his third consecutive start with yet another gem of a game in what’s shaping up to be a fine season.

Ryu held the Washington Nationals to no runs and two singles over a season-high seven innings at Dodger Stadium in Los Angeles on Saturday (local time), striking out eight and walking three as the Dodgers took the game 4-0.

After out-dueling the Nationals ace Stephen Strasburg, Ryu improved to 3-0 and lowered his ERA from 2.87 to 1.99. He leads Dodger starters in wins and ERA.

“It was definitely nice,” Ryu was quoted as saying on MLB. “I always say I don’t overpower the hitter, so command is very important. I’m very happy with my [start] today and how I contributed to the team winning.”

Ryu was lifted for pinch hitter Kiki Hernandez in the bottom seventh with the Dodgers nursing a 1-0 lead, and Hernandez immediately provided an insurance run with a solo home run off Strasburg. Clay Bellinger gave the Dodgers more breathing room with a two-run blast in the bottom eighth.

“He tried to come in on a couple of guys and got beat when it he didn’t get it to the spot,” Dodgers’ manager Dave Roberts was quoted as saying on MLB. “But the change, the breaking ball, the fastball command and the cutter was really good. He was good tonight and it was good to see him give us those six innings.”

Ryu threw 89 pitches, 58 of them for strikes. Tony Cingrani took over on the mound in the eighth, and Kenley Jansen finished off the Nationals with a scoreless ninth.

Ryu retired his final 13 batters in a row, after allowing a base runner in each of the first three innings.

Following a shaky season debut against the Arizona Diamondbacks on April 2, Ryu has limited opponents to just two earned runs over his past 19 innings with 25 strikeouts. He has also struck out at least eight batters in three consecutive starts for the first time in his career.

For the season, Ryu, who has never been a high strikeout pitcher, ranks second on the Dodgers with 27 strikeouts in 22 2/3 innings, behind only Clayton Kershaw.

Ryu worked around a two-out walk to Bryce Harper in the first inning. He gave up a single to Matt Wieters with one out in the second, but then struck out the next two batters.

The Nationals loaded the bases with two outs in the third, thanks to a single and a pair of walks, but Ryu escaped the jam by getting Moises Sierra to ground out to shortstop.

Ryu settled down afterward. He struck out the side in the fourth, and worked his way through the Nationals lineup with an effective mix of fastballs, changeups, curveballs and cutters.

Ryu had been scheduled to start on Sunday, but an injury to Rich Hill forced the Korean to take the mound with one fewer day of rest.