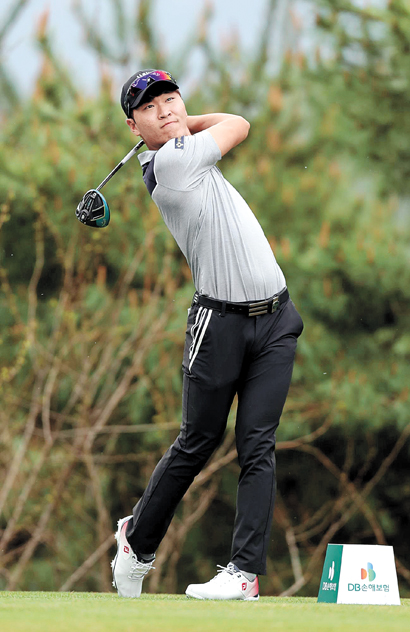 Jeon Ga-lam watches his shot during the final round of the Dongbu Insurance Promy Open at Montvert Country Club in Pocheon, Gyeonggi, on Sunday. [KPGA]

With an eagle, five birdies and a bogey, Jeon shot six under par, 66, in the final round, finishing four shots ahead of runner-up Park Hyo-won.

Jeon played the final round with Kim Tae-hoon, who normally brings out the most fans of the KPGA Tour players. An active group of onlookers followed both Jeon and Kim as they made their way through the tournament’s final round.

In the first nine, it was Park that led the field, shooting six under par only in the first nine. Following an impressive front nine, Park started off the back nine with back-to-back birdies on the 10th and the 11th hole to take a sole lead.

However, Park’s lead didn’t last long. While Park made a double-bogey on the par-5 12th, hitting his tee shot out of bounds, Jeon started to make his way up to steal the lead at 13 under par. Following a chip-in birdie on the par-4 fifth, Jeon made an eagle by making an 11-meter (36-foot) putt to take the lead.

As the other players failed to make birdies, Jeon cruised through his way to a victory. With back-to-back birdies on the 11th and 12th, Jeon extended his lead by four shots. Although he made a bogey on the following hole, it didn’t change the flow of the tournament much, as he still held quite a lead.

Then, by making a long 15-meter putt on the last hole, Jeon concluded the tournament with a commanding five-shot lead. Following a birdie putt, Jeon took off his hat and celebrated his first-ever victory at home.

“Since this is the course that I feel the most comfortable at, I wanted to win this tournament more than the others,” Jeon said. “I am so happy that I don’t know how to express my feelings in words.”

And Jeon’s first professional victory at the Montvert Country Club is even more meaningful since he worked as a caddie at the course for five months before turning professional. Having started golf in eighth grade, Jeon worked at the Montvert Country Club briefly when he lost interest in golf. However, caddying for a player who was competing at a tournament once again encouraged him to continue his career as a professional player.

Watching the winner make his putt on the last hole, Jeon decided to turn professional that September. Having gone through the qualifying tournament that year, Jeon made his KPGA Tour debut in 2016.

Finishing 23rd and 21st at this tournament in the two previous seasons, Jeon won only in his third year. With a victory, Jeon took home the prize money of 100 million won ($93,355).

“My goal this season was to win my first tournament,” Jeon said. “But now that I’ve won the season opener, I think I need to change my goal.”