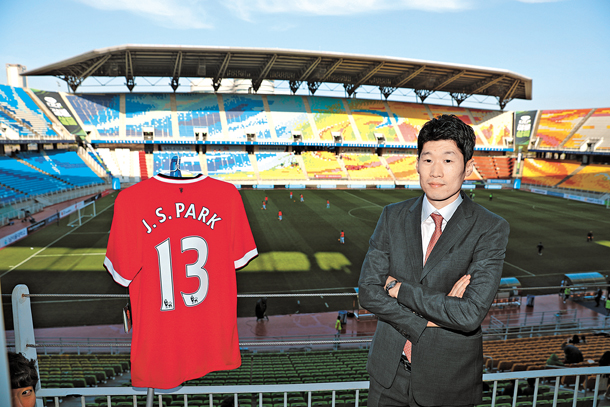 As questions linger about the Korean national football team’s preparedness for the upcoming World Cup this summer in Russia, former Manchester United star midfielder Park Ji-sung said the squad needs to focus on consistency and teamwork. 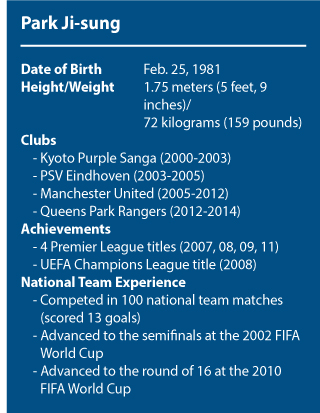 “There is no such thing as an easy opponent at the World Cup,” said Park at Suwon World Cup Stadium in Gyeonggi on Wednesday. “Even if we allow the opposing team to score the first goal, it’s important for us to keep our pace of play. The most important thing is to wait for our chances, because we’ll get the chance at one point in the match.”

The 2018 FIFA World Cup, starting on June 14, is Korea’s ninth consecutive appearance at the event. Despite the team’s achievement, expectations for Korea’s showing this year are lower than ever, as Korea barely earned its berth through the qualification tournament. Korea showed weak teamwork, and will face tough competition from Germany, Mexico and Sweden in the group stage. Many football fans don’t think Korea will advance on to the round of 16.

Park, who competed in three World Cups throughout his career, pointed out that patience is the key in advancing further at the event. Since it’s difficult to play a match without giving away a single goal, Park emphasized that it is important that the team keep its play consistent even after giving away the lead. To win, he said teamwork is crucial.

Korea showed weakness in defense and goal scoring in recent qualification games, finishing the last two matches with scoreless draws. Due to the national team’s disappointing performance, the K League has lost a significant number of fans this season. Some players are receiving harsh personal criticism from their fans online.

“If [the fans] treated the players better, it may help them significantly at the World Cup,” Park said. “Though they’re receiving criticism now, they need to try their best to redeem themselves at the World Cup. I hope they take this difficult time as their motivation [to play better].”

Before Park retired, he was known for his hard work. Whatever position Park was assigned to, he dedicated himself to it. His work ethic impressed major stars, as Italian footballer Andrea Pirlo once said, “Best opponent [Lionel] Messi, most irritating opponent [Ji-sung] Park.”

Korean fans often bring up Park when commenting on online articles about the national team, writing, “We miss Park Ji-sung, who worked hard in any situation.”

“It is true that I tried my hardest in every match I played in,” Park said. “I didn’t try to make myself stand out [in a match]. In every situation, my team was the priority and I thought that I need to play my role within the team. So the statement, ‘The team played well because it had Park Ji-sung,’ isn’t true. It all worked out because Park Ji-sung’s play and the team’s strategy got along. I hope our players show the fans that they’re ready as a team in Russia.”

Park also pointed out the importance of leadership.

“The captain has a weight on his shoulders,” Park said. “Unless there are other variables at play, I believe Ki Sung-yueng will take that role. Since he got through the good and the bad times as a captain, his experience will help the national team at the World Cup.”

Park also mentioned the role of Son Heung-min, a rising talent at Tottenham Hotspur. Though Son is younger than the other players on the team, he has a lot more high-level experience than others. He debuted at a young age and has played in the Bundesliga and Premier League, which Park believes will help the national team at the World Cup.

“Other than avoiding injuries, I don’t have any advice to give [to Son],” Park said.

After he retired in 2014, Park has been hosting the JS Cup, an international friendly tournament, to help the development of junior football programs in Korea.

“The reason behind hosting the JS Cup every year since 2015 is to allow younger players to develop by competing against foreign players, who have a different playing style,” Park said.