Mother of Japan’s Arita ware to get statue in Icheon

Mother of Japan’s Arita ware to get statue in Icheon 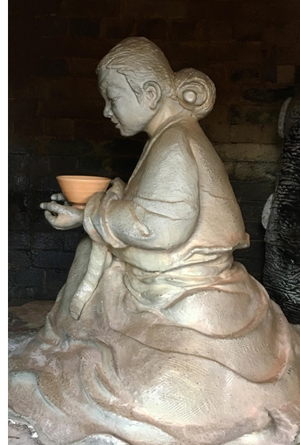 A statue of Baek Pa-sun, a Korean ceramic artisan who helped give birth to Japan’s porcelain production in the city of Arita. [YONHAP]

ICHEON, Gyeonggi - An industry group of Korean ceramic artists said Sunday it will set up a statue of a Korean ceramic artisan revered for helping give birth to Japan’s first domestic porcelain production in the city of Arita on Japan’s southwestern main island of Kyushu.

The potter is Baek Pa-sun (1560-1656). She is a legendary female potter who blazed the trail for what is now known as Arita ware in Japan.

A delegation of the Korean Ceramics Art Association in Icheon, south of Seoul, and the Baek Pasun Memorial Society will visit the Japanese city on April 29 to unveil the statue at a gallery named after the potter.

The installation of the 1.9-meter (6.2-foot) statue at Gallery Baekpasun is timed to coincide with a ceramics festival in Arita.

Ahn Seok-young, a ceramics artist in Yeoju, south of Seoul, produced the statue, which depicts Baek clad in “chima jeogori,” or traditional Korean dress, looking at a teacup in her hands.

The Gyeonggi provincial government footed the 130 million won ($121,360) bill for the project.

Baek hailed from the Korean city of Gimhae and was the first female pottery expert in the Joseon Dynasty (1392-1910).

She was captured along with her husband, Gimhae potter Kim Tae-do, by Japanese soldiers during the 1592-98 Japanese invasions of Korea.

They were taken to the town of Takeo near Arita, in what is now Japan’s Saga Prefecture, in the late 16th century.

According to historical records, Baek moved to Arita with about 900 Korean potters after her husband died, making a tremendous contribution to the development of Arita ware.

She remained in Arita as the leader of pottery making until her death at age 96, establishing herself as the mother of Arita ware.

Yoon Tae-woon, 71, leader of the Baek Pasun Memorial Society, said the society has worked closely with a group of ceramic artists in the Japanese city for the past year to carry out a project that sheds light on Baek’s achievements and the Korea-Japan relations she created.

“We hope our project will help many people understand that the development of Japan’s ceramics was made through its invasion of the Korean Peninsula and provide them with an opportunity to learn more about Korean ceramics,” he said.