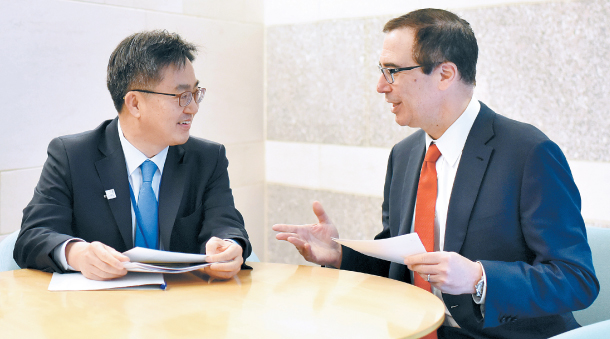 Korea will reveal the records of its interventions into foreign exchange markets, the country’s finance minister said on Saturday, though it will endeavor to have a minimal impact on financial markets.

“We will find a way to reveal the records gradually to allow for a soft landing,” said Finance Minister Kim Dong-yeon on Saturday in Washington.

Kim has been in the United States for the past few days to attend the G-20 Meeting of Finance Ministers and Central Bank Governors. His statement came during a sideline meeting with Korean reporters.

Kim called disclosing the records a “duty” for “a country with a mature economy and foreign exchange market such as Korea.”

Currency market transparency has been a major issue for Korea, which has been pressured by the United States and the international community to disclose its intervention in the market. The country has faced suspicion that it used its influence to affect the value of the won.

Earlier in the day, Kim sat down with Steven Mnuchin, the U.S. treasury secretary, in a bilateral meeting. Kim said the Korean government will publish the records after “comprehensively considering the impact on the country’s foreign exchange market and economy” as well as “the recommendations by the International Monetary Fund [IMF], a G-20 agreement, the Trans-Pacific Partnership [TPP] and precedents by other countries,” a decision welcomed by Mnuchin, according to the Finance Ministry. Kim also met Christine Lagarde, the managing director of the IMF, a day earlier on Friday to discuss the same issue.

“The international community does not understand why Korea has not disclosed the records given the size of our economy,” Kim explained.

But despite pressure from the IMF and the United States, Kim said the decision will ultimately be made “independently.” The finance minister also emphasized that Korea will maintain its foreign exchange policy of allowing the market to control the dynamics but intervening in case of extreme one-sided volatility.

Kim spoke on the possible schedule for the release of records.

“Each country reveals the records on a daily, monthly or quarterly basis depending on its circumstances, and some on a six-month basis although this is rare,” he said. Kim’s statement indicated that Korea would release records at least more often than once every six months.

The prevailing expectation is that the Finance Ministry will disclose records on a quarterly basis and only reveal its net purchasing figures. This is backed up by the possibility of joining the TPP, which requires members to disclose their intervention records every three months.

“Each authority will disclose publicly no less frequently than quarterly intervention in spot and forward foreign exchange markets, in a manner that provides appropriate transparency, no later than three months after the end of each quarter,” reads the TPP’s joint declaration.

“We will make our decision in the first half, if possible, after sufficient discussion and review among concerned ministries,” said Kim on the possibility of signing the international trade agreement.