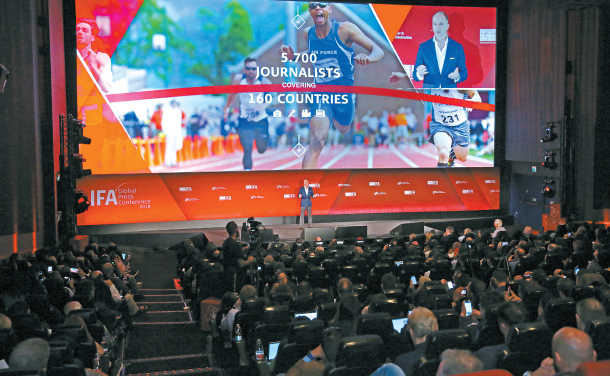 Christian Goke, the CEO of Messe Berlin, speaks during the IFA Global Press Conference in Rome on Saturday [IFA]

ROME - The storied Internationale Funkausstellung Berlin trade show is not jumping on the bandwagon and inviting car companies to show off their latest technology, as it’s instead sticking to its traditional focus on consumer electronics.

“We see these days that more than 80 percent of the exhibitors are from the auto industry at tech show,” said Jens Heithecker, an executive director at the IFA, in an interview with the Korean media on Saturday at the IFA Global Press Conference in Rome.

“We think about how to save our core, which is consumer electronics, home appliances and retailers,” Heithecker said.

But the IFA isn’t exactly giving the cold shoulder to the automotive industry. It is introducing a new sideline event called Shift Automotive dedicated to future mobility this year.

The IFA joined forces with the Geneva International Motor Show for Shift Automotive, which will be held during the last two days, Sept. 4 and 5, of the official IFA event, which is scheduled to run from Aug. 31 to Sept 5.

When asked whether Korean carmakers including Hyundai Motor and Kia Motors will participate, Heithecker said, “They are all invited,” without specifying exactly which companies would appear.

The IFA’s focus on its consumer electronics identity is clear, even as the show prepares to expand. 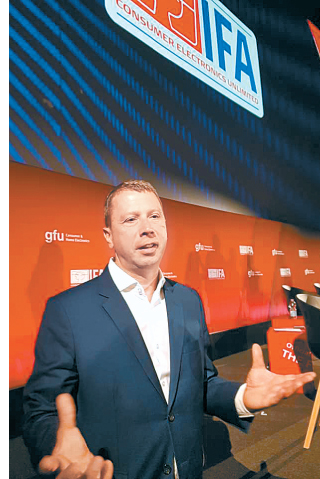 Christian Goke, the CEO of Messe Berlin, the organizer of the IFA, said that the show will not grow too large in order to maintain its quality for both exhibitors and visitors.

“We see the maximum floor size as 250,000 square meters (62 acres), and if the show grows over that size, it is hard [for the visitors] to grasp the entity and the overview,” Goke said.

The press event in Rome was a chance for the media to get a sneak peek of what this year’s IFA show will look like. Some 360 journalists from around the world participated in the two-day event which took place on Friday and Saturday.

“We are trying to invest in the quality of the show. What can be digested is important,” Goke added.

The IFA is Europe’s biggest consumer electronics show, and is held every September in Berlin. Last year, the show had 252,000 attendees, including some 145,000 trade visitors. There were 1,805 exhibitors.

“The main reason [for Korean companies] to attend IFA is first because it has the best timing,” Heithecker said. “September is the best time to prepare the main season in the Western market and even in the Asian market. It is the most important business season.”

Samsung Electronics and LG Electronics are both trying to penetrate Europe’s built-in home appliance market, and Heithecker said that they “have a lot of chances” in the future.

The executive explained that Europe’s built-in home appliance market depends on the reconstruction period of buildings, which takes place every eight to 10 years.

“You can’t influence this market in the easiest way, but the good thing at the moment is that there is a boom in reconstruction in all of Europe, which means the built-in market is growing and there are a lot of chances for every company with high-quality products to get it,” he added.

Hans-Joachim Kamp, the chairman of the supervisory board of the IFA’s organizer, painted a rosy picture of the future of the consumer electronics market.

The TV market will stay dynamic, as consumers continue to demand bigger and better-quality screens. As a result, the number of TV models on the market has exploded over the past decade. There were 21,600 TV models in the market in 2008, but that number grew to 44,300 in 2017.

“Innovation will continue to be a driver for the business,” Kamp said.

According to Georg Walkenbach, member of ZVEI Managing Board of Directors, diverse new electronic products are driving sales of small domestic appliances higher and higher.