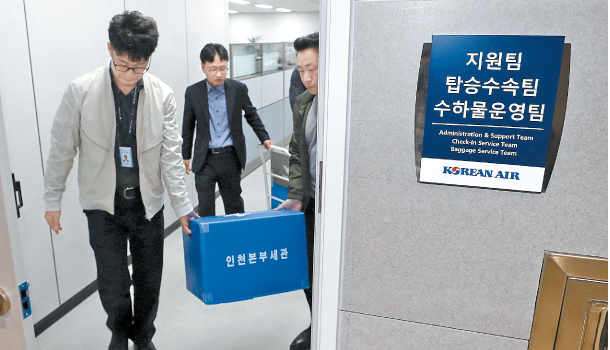 Korea Customs Service officials carry confiscated articles after searching the Korean Air office in Terminal 2 of Incheon International Airport on Friday as part of the customs authority’s raid on the homes and offices of the company’s owner family. [YONHAP]

Amid nationwide rage against the Korean Air owners’ abusive and allegedly illegal activities, the company’s CEO Cho Yang-ho publicly apologized on Sunday and said that his scandal-prone daughters would give up their posts at the airline.

“As chairman of Korean Air and head of a household, I can’t help but feel terrible about the immature behavior that my daughter has done,” said Cho in a statement. “I am to blame for everything. I apologize to everyone.”

Delivering his apology to employees and victims of “gapjil,” a Korean word that means abuse of power, Cho, who is also chairman of Hanjin Group, said that his two daughters would step down from “every post” within his business empire.

Cho Hyun-min, his youngest daughter, is the protagonist of the latest “water rage” scandal. On April 12, Cho Hyun-min, a senior vice president at Korean Air, publicly apologized after allegations spread that she verbally abused and threw water at an employee of the airline’s advertising agency in March.

Just two days after her apology, a voice recording of the incident was released by a local online news outlet. Cho can be heard yelling and swearing furiously at unidentified employees.

Cho Hyun-ah, the chairman’s oldest daughter, threw the infamous “nut rage” tantrum in 2014 that forced a taxiing plane to return to its gate and landed her in jail for three months. She returned to the management as president of Korean Air’s affiliate KAL Hotel Network after a four-year hiatus.

To help patch up the scandal, the 70-year-old patriarch of the company also said that Korea’s flag carrier would appoint Seok Tae-soo, CEO of Hanjin Kal Corporation, to a new vice chairman post and vowed to beef up the power of the company’s board of directors.

The group will also establish a compliance committee that includes external figures as members to “prevent reoccurrence of similar incidents.”

The chairman’s surprise statement came a day after customs officials raided the homes and offices of the Cho family. Allegations surfaced a day earlier that they habitually smuggled products from abroad and avoided import taxes.

“We have already secured evidence related to the Cho family’s smuggling and customs evasion,” said an official from the Korea Customs Service.

This is the first time that Korea’s customs authority has raided members of any chaebol family.

The customs office also officially launched an investigation into Cho Hyun-ah, Cho Hyun-min and Cho Won-tae, the two daughters and son of Chairman Cho. Any members of the Cho family could be summoned for further probes, the KCS said.

The Chos face allegations that they used their family business to fly in goods that are either banned from Korea or require importers to pay customs tax. The items range from sausages and fruits to luxury lingerie, clothes and furniture.

Should the probe confirm the accusations against the siblings, the heirs may face up to five years in jail or a penalty worth 10 times the amount of import duties they should have paid.

On April 19, the police raided Korean Air’s headquarters in Gangseo District, western Seoul, confiscating the mobile phones of Cho and another executive who was present during the episode.

In the wake of the scandal, however, Hanjin patriarch Cho had his office on the seventh floor of the group’s headquarters in Gangseo District soundproofed, according to insiders.

Even though the construction work was done quietly, information about it spread quickly outside of the company. An open group chat room on KakaoTalk, in which about 900 Korean Air employees reveal the behavior of the Cho family, mentioned the construction, according to some members.

The Korean Air denied the soundproofing took place but refused to disclose photos of the chairman’s office at the request of Yonhap News Agency on Sunday.