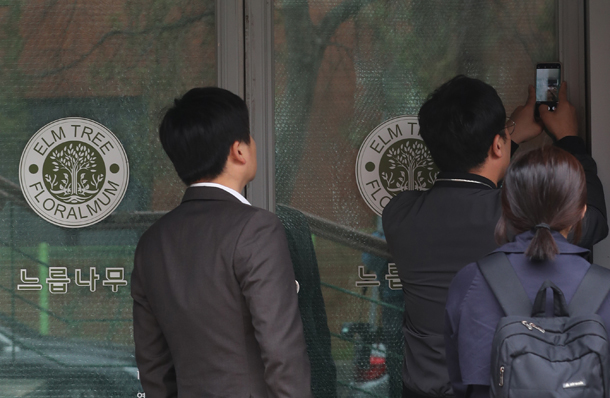 During the ongoing investigations into the allegation that the ruling Democratic Party (DP) ran a systematic online opinion manipulation campaign via a blogger, police found DP Rep. Kim Kyoung-soo’s aide received 5 million won ($4,670) from the blogger.

“The blogger surnamed Kim [who goes by the ID Druking] sent a Telegram message in March to Rep. Kim’s aide, mentioning a 5 million won transaction and threatening the aide with it,” Seoul Metropolitan Police Agency said on Saturday. Telegram is a mobile messaging app.

Rep. Kim issued a statement on the same day confirming that his aide did receive the money.

“The aide received 5 million won but returned it,” Kim said. “I also did not know about it. The aide must explain what happened to police. I hope investigations will be able to bring to light the facts.”

Police confirmed the transaction and said they will be questioning the aide, who recently quit his job, and that the aide returned the money after the blogger was arrested on March 25. Authorities will be investigating whether the money was a bribe in return for a political favor.

The latest revelation is part of the ongoing probe into whether the DP ran a systematic online opinion manipulation campaign to tilt the race in favor of Moon Jae-in’s candidacy in last year’s presidential election.

“We will find out if the community was used for a systematic online opinion manipulation campaign,” police said.

Druking and two employees of his publishing company, Elm Tree, were arrested on March 25 for allegedly running a smear campaign against the Moon administration’s decision to field a joint women’s hockey team with North Korea for the 2018 PyeongChang Winter Olympic Games. The trio used to be members of the DP, until the party expelled them last week.

They are suspected of running a program through which one is able to input multiple comments or likes for particular comments on Naver stories. Over four hours on the night of Jan. 17 and into the next day, the trio had made 614 likes for remarks criticizing President Moon’s decision to field a joint women’s hockey team with North Korea, according to police.

But the probe took a turn when Druking’s connection with Rep. Kim came into light. He was found to have communicated with the lawmaker, one of President Moon’s closest confidants, through Telegram from November 2016 to March this year.

According to authorities, Kim sent 14 messages to Druking via Telegram, 10 of which were links to websites, including online articles. In the four other messages, police quoted Kim as saying, “Please promote” and “Are comments on Naver usually like this?”

Druking reportedly sent hundreds of messages to Kim, sparking speculation that the politician was behind the power blogger’s political operations.

Police found Druking and Kim conversed through another encrypted messaging app called Signal. Druking sent the lawmaker 39 messages from January to March 2017, while Kim sent the blogger 16 messages during the same period. Police did not get into the details of what they talked about.

Druking told authorities that the recent smear campaign was partly a vendetta after his request to Rep. Kim to have an acquaintance appointed as consul general in Osaka was denied.

Rep. Kim had acknowledged that he referred the person to the Blue House for vetting, though he told the press that he “did not know whether the person would get the job.”

A senior presidential official speaking on the condition of anonymity acknowledged it received the recommendation and vetted the person for the Osaka position. The Blue House concluded the person was “not fit” to serve in the role, the official said.

After the person did not get the position, Druking then threatened Rep. Kim’s aide with the text message mentioning the 5 million won, according to police.

While much of what the blogger and his team did during the election last year is not yet known, the fact that he had communications with one of the most-trusted confidants of the president comes as an embarrassment to the ruling party and the presidential office.

The opposition has been calling for a special prosecutorial probe to get to the bottom of a scandal they say bears resemblance to a cyber smear campaign perpetrated by the intelligence agency in the 2012 presidential race against Moon and in favor of rival candidate Park Geun-hye.

In press briefings on April 14 and 16, Rep. Kim strongly denied he gave any improper commands to the blogger or his group on cyber operations and that the opposition’s criticism is “politically motivated” ahead of the June 13 local elections. Kim is running for the South Gyeongsang governorship.