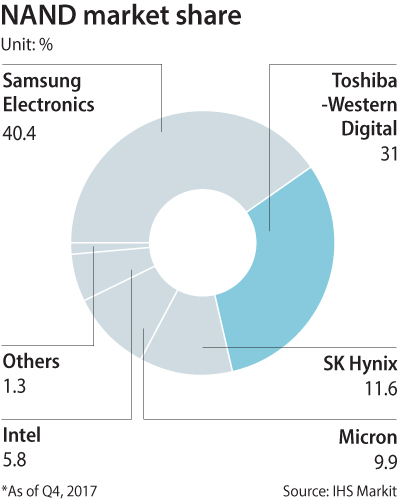 The sale of Toshiba’s memory chip unit to a consortium led by U.S. private equity firm Bain Capital faces an uncertain future, as Chinese regulators are postponing their antitrust review of the $18.6 billion deal.

The deal, inked in September of last year, was initially scheduled to close by March 31. However, the date was pushed back to May 1, as China’s antitrust authority slowed down the review, which began in early December and was set to be completed by April 13.

New information from sources familiar with the deal indicates that China will finish its review of Toshiba Memory’s sale by May 28. Japan’s Mainichi newspaper reported on Sunday that Toshiba decided to cancel the deal if China doesn’t approve the transaction by May.

Toshiba’s position is explained by the company’s improved bottom line. The company is no longer desperate to sell its memory unit for cash, as it sold new shares worth 600 billion yen ($5.56 billion) last December. The Japanese NAND flash giant may now consider amending the sale agreement or listing its memory unit by as early as next year.

On Monday, Toshiba issued a press release on “media coverage of the sale of Toshiba Memory.”

“Toshiba still intends to close the memory business transaction as soon as possible, and has not decided any concrete policy for the alternative, including termination of the transaction under certain circumstances,” the release said. It went on to say that the new deadline of May 28 for China’s review was “not announced by Toshiba.”

The deal to sell Toshiba Memory to the consortium led by Bain Capital, Apple and Dell along with other tech firms including SK Hynix, needs China’s approval because of the country’s huge demand for semiconductors.

Authorities from all of the seven other signatories that import large numbers of chips - Korea, the United States, Japan, European Union, Brazil, the Philippines and Taiwan - approved the deal.

China’s “Made in China 2025” policy drive named semiconductors a key development area for the country to help it compete against the United States, Japan and Europe. It wants 70 percent of semiconductors sold to China to be made in the country by 2025, up from the current 25 percent.

China’s plan may hit a stumbling block if SK Hynix, Korea’s second-largest memory chip maker, approves a plan to inject 4 trillion won ($3.7 billion) into the Toshiba Memory acquisition plan in return for an equity stake of up to 15 percent of the voting rights for the next 10 years.

The memory chip unit of SK, the country’s third-largest conglomerate, was the world’s third-largest NAND flash memory chip maker with a share of 11.6 percent as of the fourth quarter of 2017, according to industry researcher IHS Markit. Toshiba’s joint venture with Western Digital was the second-largest player with a 31 percent market share after Samsung Electronics.

SK Hynix is weaker in NAND flash than in DRAM. Its share in the DRAM market was 28.1 percent, trailing Samsung’s 45 percent.

China fears that if SK Hynix acquires a stake in Toshiba Memory, the inventor of NAND flash technology, SK could beef up its NAND capacity to a formidable extent.

The Icheon, Gyeonggi-based company is maintaining a wait-and-see stance regarding the deal.

“We are not in a position to actively talk about the deal, given we are part of the consortium,” said an SK Hynix spokesman.

SK Chairman Chey Tae-won had an optimistic outlook on the deal.

The issues regarding the delay of the deal “will be tackled soon,” he told reporters on April 19, adding that he is not thinking about possibly renegotiating the deal.

The chairman also denied allegations that the ongoing trade dispute between China and the United States is affecting China’s review process, saying that the deal is “irrelevant, to be honest.”

Foreign media outlets have reported that China sees its ability to hold up deals such as the Toshiba acquisition and Qualcomm’s purchase of Dutch chipmaker NXP Semiconductors as a leverage point in its ongoing trade conflict with the United States. The U.S. Trump administration is pushing to slap hefty tariffs on Chinese imports, citing its unfair trade practices.

Even if the deal falls through, SK Hynix doesn’t have much to lose at this point, analysts say.

The chipmaker in the past year secured its own core technologies for key products, including solid state drives for servers that use NAND flash memory. This is the area where it needed Toshiba’s memory division for support.

“On the back of its ample cash reserves, SK Hynix is expected to continue investing in facilities for NAND flash memory amid rising demand,” said Park Yoo-ak, an analyst with Kiwoom Securities.