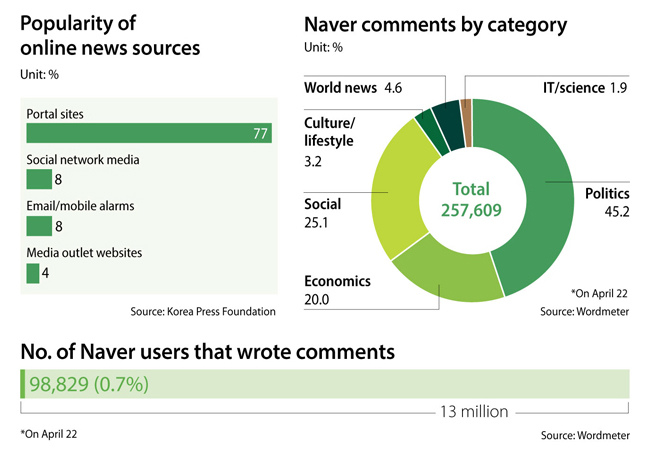 Naver has once again come under fire after the Druking scandal exposed how vulnerable the portal site’s comments section is to manipulation, giving rise to questions on the company’s comment policies and its role as a news platform.

“The National Assembly should look into portal sites eliminating news comment boxes and furthermore consider making them close their news platform business,” said Ahn Cheol-soo, leader of the People’s Party, at a press event on Sunday.

Ahn is one of a number of high profile critics that have turned against Naver’s news policy following the scandal in which a 49-year old blogger that goes by the alias Druking attempted to manipulate opinions online by running a program through which one is able to input multiple comments or likes for particular comments on news reports on Naver.

At local portal sites Naver and Daum, the number of likes attached to a news comment decides how high up it appears in the comment box below the article, although the exact algorithm is not disclosed. The assumption for most users is that the higher a comment appears on the list, the more readers endorse what it says.

The macro software can repeatedly “like” a specific comment, artificially boosting its popularity and pushing it up the page. Making the comment appear popular in this way is an attempt to influence readers by making them believe that the opinion expressed is what a majority of people believe.

Naver adopted the like-based alignment system for its news comments in 2015. Previously, comments appeared in chronological order. Critics say that the policy created an environment where people like Druking could attempt to manipulate online opinions while the portal site enjoyed more traffic and profit.

In reality, only a tiny percentage of Naver users actually post comments on news stories. Taking April 22 as an example, 98,829 of some 13 million people who read news stories posted comments that day - just 0.7 percent. Of the 257,609 comments they wrote that day, 45 percent were on articles in the politics section.

The controversy is rooted in an online news consumption pattern specific to Korea. Unlike search engines like Google, which offers articles through external links to media outlets, Korean portal sites Naver and Daum run internal platforms similar to Yahoo that show articles from partnered media within the portal sites’ own ecosystem, providing comment boxes for people to share opinions below the text.

Very often, articles shown on the portal site with hundreds of comments have none on the original media outlet’s own website.

A report from the Korea Press Foundation last year showed that 77 percent of online news consumers use portal sites.

“Compared to Facebook or Twitter where comments generally appear with names, photos or personal information, online news comments on local portal sites are more anonymous in nature and this may create a more favorable environment for macro software to make fake likes and comments,” said Professor Kim Chun-sik of media communications at Hankuk University of Foreign Studies.

On claims that Naver is partly responsible for creating an environment vulnerable to manipulation, a company spokesman said it cannot give an official comment on a case that is currently under police investigation.

Portal site comments have been accused of being vulnerable to organized manipulation in the past. Before the Druking case was exposed Naver announced a plan to reform its comments policy to impose stricter bans regarding the use of macro software.

“Even in the past, we’ve made constant improvements to the news comment section and we are still devising various ways to improve the service,” said a Naver spokesman.

However, the recent case shows that Naver may not be able to completely eradicate the possibility of macro software playing with its news comments.

Suggested responses to Naver’s current news comment policy vary from shifting the alignment algorithm back to chronological order, closing down the news comment service as a whole, or, more radically, shutting down the news platforms altogether and linking users directly to media outlets.

“I believe prohibiting people from uploading comments on portal websites violates the constitution, as it is suppression of freedom of speech,” said Koo Tae-eon, a managing partner and attorney at the law firm Tek & Law. “Even if it happens, people will simply move to another platform to upload comments.”

Koo added that the decision to shift to linking users to media websites, rather than hosting stories directly on the portal, is a decision that should be left to private companies. The government should solely focus on punishing manipulation attempts like Druking, he said.

Academics and insiders in the media industry say that Naver has undeniably grown into a powerful media distributor and therefore should take on responsibility. They insist that news comment boxes are just part of Korea’s online media environment, which is led by portal sites.

“We live in a world where platform are even more influential than news suppliers,” said Professor Kim.

“It’s hard to say that popular news comments can lead to changing attitudes or politic decisions. But local portal sites are definitely deciding which articles from specific media outlets are exposed to the public, through selecting which ones go on the front page and showing rankings of the most searched keywords - all based on an algorithm undisclosed to the public.”

IT columnist Lim Mun-yeong criticized the former and current governments, saying that this is not the first time manipulation of comments has arisen as an issue.

“It’s been 20 years since portal sites showed news comments, and despite similar controversies in the past regarding online news services, governments failed to establish a central body to overlook new media outlets that encourage circulation of articles and opinions,” he said.