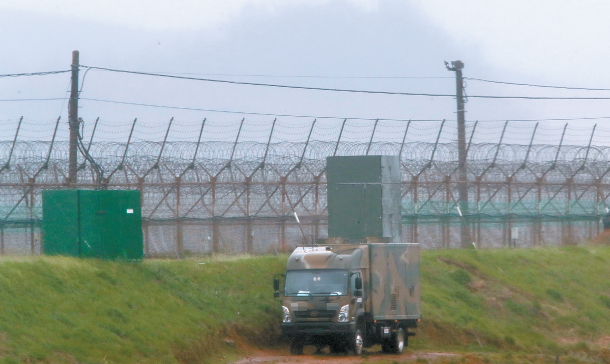 A truck mounted with a propaganda loudspeaker on Monday. South Korea’s Ministry of National Defense said it turned off the speakers to create a “mood of peace” ahead of the inter-Korean summit on Friday. It was the first time in over two years that South Korea switched off the weapons of psychological warfare that have resulted in several defections by North Korean soldiers. [YONHAP]

South Korea unplugged front-line loudspeakers that blare K-pop and propaganda criticizing North Korea’s leader on Monday, pulling back a weapon of psychological warfare that has encouraged several North Korean soldiers on the border to defect.

The Ministry of National Defense said it turned off the speakers on Monday at midnight to ease tension and create a conciliatory mood ahead of a summit between South Korean President Moon Jae-in and North Korean leader Kim Jong-un on Friday. The speakers had been running continuously since January 2016 after North Korea conducted its fourth nuclear test.

Over the past decades, the South has turned the cross-border broadcasts on and off in response to the political situation with North Korea. The loudspeakers have proven to be an effective weapon of psychological warfare, with North Korean soldiers at one point firing shots toward them in 2010.

The North operates its own loudspeakers along the demilitarized zone (DMZ) which separates the two Koreas, but they have much less impact because of an electricity shortage. South Korean military officials said it was not immediately known whether the North unplugged their speakers, too.

Jeung Young-tae, a senior fellow at the government-funded Korea Institute for National Unification, analyzed South Korea’s move as a response to North Korea’s recent announcement that it would halt nuclear and intercontinental ballistic missile (ICBM) tests and close a nuclear test site.

Last Friday, Kim Jong-un told top political aides during a plenary meeting of the Central Committee of the Workers’ Party that the North would close a nuclear test site in the country’s northern region and refrain from conducting any further nuclear and ICBM tests because it has already completed development of its weapons program.

The South Korean government welcomed the gesture, calling it “meaningful progress toward denuclearization of the Korean Peninsula.”

About 40 loudspeakers straddle the southern side of the DMZ, and South Korean authorities say the broadcasts can be heard about 10 to 20 kilometers (6 to 12 miles) away by North Korean soldiers and residents living near the border. The broadcasts mainly contain South Korean news, K-pop and snippets of K-dramas, all content that is strictly forbidden in North Korean society. Smuggling them into the country carries harsh punishment.

The news is often critical of Kim Jong-un, whose image is strictly protected by the country’s cult of personality. In February of last year, the South Korean military broadcasted news that the North Korean leader’s half brother, Kim Jong-nam, was killed by a lethal nerve agent at a Malaysian airport. Seoul blamed Kim Jong-un for the alleged assassination and urged the International Criminal Court to try him for using a chemical weapon.

The Defense Ministry believes the psychological warfare works. Last June, a North Korean soldier defected to South Korea by crossing the border and said the broadcasts had convinced him to escape.

Under President Moon, though, the broadcasts have become more conciliatory as he seeks engagement with North Korea. Earlier this year, Rep. Kim Hack-yong of the main opposition Liberty Korea Party, who heads the parliamentary National Defense Committee, said the broadcasts have refrained from castigating Kim Jong-un and instead focus more on inter-Korean cooperation. Some reports, for example, have mentioned the two countries’ joint entrance in the opening ceremony of the PyeongChang Winter Olympics and a joint women’s ice hockey team.

The shift in tone came after Moon suggested in a speech last July in Berlin that both countries halt all hostilities against each other at the border on the occasion of the 64th anniversary of the truce agreement that ended fighting in the 1950-53 Korean War.

South Korea initially started the propaganda broadcasts on May 1, 1963, near the western part of the DMZ. They were turned off in November 1972 after both sides agreed in July that they would not slander each other or make any military provocations. In the decades afterward, the loudspeakers have been switched on and off following the ebb and flow of inter-Korean relations.

In 2015, South Korea turned on the loudspeakers after two of its soldiers were maimed by a land mine blast while patrolling the DMZ. The South accused the North of sneaking across the border to plant mines near a South Korean guard post with the intention to kill. North Korea denied the allegation and declared a “semi-state of war” in response to the loudspeaker broadcasts. It demanded the South scrap the loudspeakers within 48 hours. When the South refused, North Korean soldiers fired shots over the border. South Korean troops responded with rounds of their own. No casualties were reported.

Moon’s chief of staff, Im Jong-seok, who leads a government preparatory committee for the upcoming summit, told local reporters last week that Seoul was interested in discussing “demilitarization of the DMZ” with Pyongyang, hinting that the issue could be brought up this Friday.

The act would require both countries to clear the 4-kilometer (2.5-mile) DMZ of all weapons, land mines and guard posts. South Korea operates around 60 guard posts within the DMZ, while the North runs around 160.

On Monday, the Blue House said both Koreas agreed in a working-level meeting earlier in the day that Moon would host a welcome reception for Kim on the southern side of the border Friday morning after the North Korean leader crosses the Military Demarcation Line (MDL) to the Peace House, a South Korean-controlled building in the truce village of Panmunjom. The two leaders will then hold their summit and have dinner together.

Kwun Hyuk-ki, director of the Blue House’s press center, said Pyongyang has allowed South Korean reporters to briefly cross the MDL on Friday to cover Kim’s activities, saying the live footage would be a “good scene for the entire world” to see.