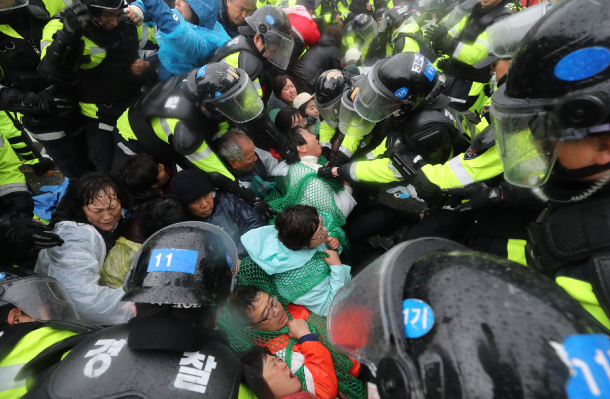 Police break up a sit-in by anti-Thaad protesters in Seongju County, North Gyeongsang, on Monday. Protesters resisted removal by binding themselves together with plastic nets and linking arms with plastic pipes underneath. [YONHAP]

The Ministry of National Defense completed the delivery of construction equipment and materials to a controversial missile defense system in Seongju County, North Gyeongsang, on Monday after police forcibly removed protesters who attempted to block construction vehicles from entering the area.

About 200 county residents and members of civic groups staged a sit-in around Jinbat Bridge in Soseong-ri, which leads to the site of the Terminal High Altitude Area Defense (Thaad) system. The system, installed by the U.S. Forces Korea, is designed to track and intercept missiles.

The U.S. military delivered the launchers and powerful X-band radar for the Thaad system last year, but the site still requires further construction and maintenance. Residents of Seongju County, where the system is located, have not been happy about having a military installment in their backyard, and in the past several weeks, they have tried to block further construction trucks from entering the site.

On Monday morning just after 8 a.m., about 3,000 police officers were dispatched to Jinbat Bridge to remove them. Under heavy rainfall, the protesters in plastic ponchos took various measures to avoid removal. Some had built makeshift tents, and others linked arms with plastic pipes weaved in between to keep police from breaking the line. They used metal grids and plastic nets to bind themselves to each other and formed a human chain by clinging onto two parked cars.

Police attempts to disperse the protesters resulted in violent altercations and scuffles that lasted for hours. At least 10 people were injured, with two protesters sent to the hospital and others suffering from minor abrasions. Police installed air mattresses under the bridge in case anyone fell off.

A little past 11 a.m., police cleared the protesters and secured the road for 22 construction vehicles, including excavators, rollers and dump trucks carrying gravel.

The night before, a slightly smaller altercation took place between protesters and police when the Defense Ministry attempted to begin securing the road to the Thaad base. For the past several weeks, the ministry has been trying to bring construction equipment to the site to improve the facilities of soldiers stationed at the Thaad base, but residents have been fiercely protesting the move.

Villagers and civic groups staged a similar sit-in on April 12 and ultimately prevented the delivery of construction equipment and materials that day.

From April 16 to 19, the Defense Ministry tried to negotiate with the civic groups to end the protest, but they could not come to an agreement.

The civic groups proposed that the ministry start repairs on leaking roofs and bathrooms first, which would take two months, and discuss resuming the rest of the construction work after the summit meeting between North Korean leader Kim Jong-un and U.S. President Donald Trump, which is set to take place around May or June. The ministry rejected the proposal.

In a statement to reporters on Monday, the ministry said, “After determining that the currently urgent construction work to improve the living conditions for soldiers stationed at the Thaad base in Seongju can no longer be delayed, with the cooperation of police, we began transportation of the material, equipment and personnel needed for the construction work.”

The ministry hopes to improve the living quarters of 400 Korean and American soldiers stationed at the base by repairing leaky roofs ahead of monsoon season, expanding bathrooms and building a kitchen. The current facilities are overcrowded and meant to accommodate up to 150 soldiers, the ministry said, and because they lack a proper kitchen, soldiers have been eating combat rations flown in by helicopters.

The ministry plans to carry out construction work over the next two to three months. Further clashes between protesters and construction workers going in and out of the base are likely, but the ministry and police have not yet revealed how they will prevent future conflict.