The KBO’s top pitchers seem to have added a new pitch to their breaking ball arsenal, tossing out more curveballs this season than recent years. 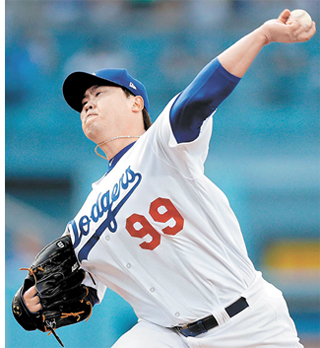 Ryu Hyun-jin of the Los Angeles Dodgers throws a pitch against the Washington Nationals at Dodger Stadium in Los Angeles, California, on Saturday. Ryu has won three out of his four games this season. [AP/YONHAP]

In fact curveballs have now become the third most popular pitch in the KBO, after four-seam fastballs, at 44.5 percent, and sliders, at 21.3 percent.

But don’t call it a comeback, the curveball has been here for years. In fact, it has been the most commonly used type of breaking ball since the KBO was first established.

“The very first type of breaking ball the young players learn are curveballs,” explained a KBO scout. “They can learn the pitch without overusing their elbows or their shoulders.”

Curveballs can prove fiendishly difficult for batters to hit. The way the balls curve in can trick the brain, appearing deceptively fast, when in fact they typically travel 15 to 30 kilometers (9.3 to 18.6 miles) slower than a fastball. That said, Korean pitchers have typically opted for power and speed, and the curveball has gradually fallen out of fashion.

Ironically, it’s this obsession with power and speed that has led to the increased popularity of curveballs.

This season, the KBO pitchers’ fastballs were estimated to be at 142.2 kilometers per hour (88 miles per hour). This is the fastest average speed of fastball the KBO has recorded since 2014, according to Statiz, a baseball statistics website.

The number of pitchers throwing fastballs over 145 kilometers per hour on average has also increased to 11. In 2017 only five pitchers could pull out a high-speed fastball. The SK Wyverns’ Angel Sanchez is the fastest, averaging 150.7 kilometers per hour.

“As pitchers are feeling the pressure in a season that has seen an unusually high number of big hits, they’ve been actively learning to command a high fastball,” said Son Hyuk, the Wyverns’ pitching coach. “The first step to mastering a high fastball? Nailing a curveball.”

The major league last year saw a total of 6,105 home runs hit, 412 more than in 2000. A few years ago, Statcast, an automated tool developed to analyze player movements and athletic abilities introduced to all MLB stadiums in 2015, reported that the ideal launch angle for home runs is between 15 and 40 degrees. This data didn’t fall on deaf ears - batters are now aware, at least vaguely, what the ideal hit looks like, leading to more home runs.

As a result, batters have started to adapt their swing to try and hit that perfect launch angle.

The Statcast analysis left pitchers in a difficult position. While batters were now armed with their newfound interest in geometry, pitchers were stuck trying to find a way to prevent an onslaught of home runs. The only option left to pitchers was to make that optimum angle as hard to achieve as possible. The high fastball, which combines speed with a tricky curve, was the answer.

In the major league last season, curveballs had the lowest hit rate, at 0.215, and slugging average, at 0.141. About 10.6 percent of pitches that major league pitchers made last season were curveballs, the most since 2002. This season, Ryu Hyun-jin of the Los Angeles Dodgers is benefitting a lot from his curveball, already picking up three wins in four starts. Since his surgery in 2015, Ryu worked on cutters and curves and added more spin to his curveballs. Ryu’s ERA is now at 1.99 for the season.

In the KBO, where batters are on track to set a new home run record this season, the curveball and high fastball may be the only hope that the besieged pitchers have. Up until the 122nd game on Sunday, 291 home runs have been hit, about 2.39 per game. The record for the most KBO home runs in a season is 1,547, in 2017.